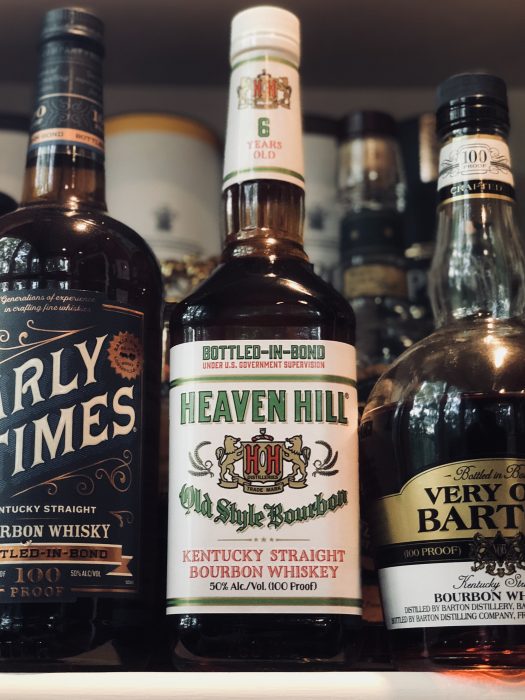 The popularity of bourbon in recent years has not surprisingly coincided with an upward trend in prices. It’s now not uncommon to stare at a liquor store shelf full of bottles priced over fifty dollars, with a growing number twice that expensive. This obviously wasn’t always the case. In fact, for much of its post-WWII renaissance, bourbon was more often affordably priced than not. Perhaps as the ultimate sign of our times, those same cheap, good bourbons of yesteryear are commanding obscene prices on the secondary markets and at auction.

It all may seem a bit depressing to fans of good whiskey, but luckily there are still exceptional bourbons out there for less than twenty dollars a bottle. While not exhaustive, we’ve compiled a list of our top 10 in this category. You’ll notice that our favorites are bottled-in-bond which, while largely a marketing device today, still guarantees that you’re getting at least a four year old bourbon at 100 proof. Most of these bottles are also easily recognizable brands. The big bourbon producers know well who helped fuel this bourbon boom, and it’s as much to do with the lifetime loyalists to the big brands as it is to the newer bourbon drinker tempted to pay way too much for a bottle with shiny packaging and little provenance. We’d recommend that the latter group check this list before emptying his or her wallet.

As a disclaimer, not all of these bourbons will be available at these prices everywhere (but they should). Also, we’ve taken the liberty of recommending a few extra bottles just outside the $20 limit that we feel are well worth the few additional dollars.

1. Heaven Hill Bottled-in-Bond Bourbon 6 Years Old – If you’re looking for the best bang for your buck in bourbon today, Heaven Hill Bottled-in-Bond tops our list. Folks who are probably hoarding it will also refer to it as “White Label” (other colored labels denote a lower proof version). At six years old, it’s a rare age-stated bottom shelfer and two years older than required for a bonded bourbon. It’s beautifully easy drinking, showcasing more classic flavor – butterscotch, vanilla, and a minty backbone – than its price tag warrants. Unfortunately, it’s difficult to come across outside of Kentucky. For the next best thing, at a similar price point, look for the non-age-stated version that’s still guaranteed to be at least four years old. 100 proof. $15 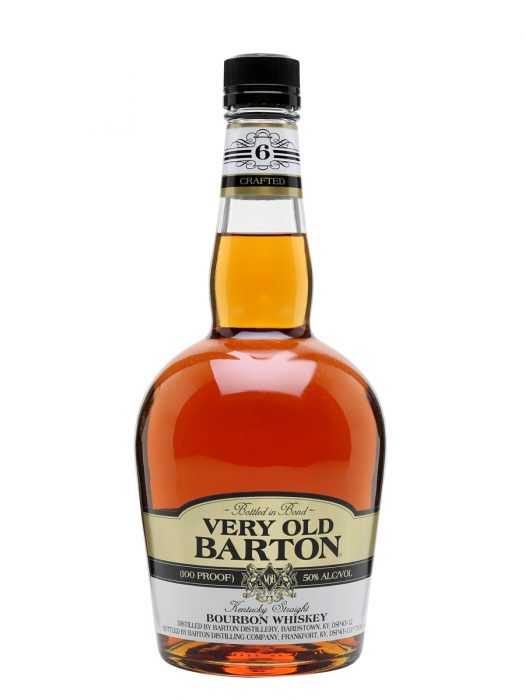 2. Very Old Barton Bottled-in-Bond Bourbon – Once a six-year-old bourbon, the bonded version of Very Old Barton has since dropped its age statement but without a very noticeable depreciation in quality. It’s made at the Barton Distillery in Bardstown, Kentucky by Sazerac and represents one of their best entry-level offerings. The bonded version packs great flavor with burly oak notes, ample cinnamon, and an almost chewy body (rare for a bottom-shelf bourbon). 100 proof. $16 [BUY IT NOW FROM DRIZLY]

3. Evan Williams Bottled-in-Bond Bourbon – Another Heaven Hill product (and also sometimes referred to as  “White Label”), Evan Williams bonded frequently ranks at the top of other budget bourbon lists. We have to agree that it deserves the praise with its rich, creamy palate full of caramel corn sweetness and a marriage of roasted fruit and spice cabinet notes. It’s another great example of classic, affordable bourbon, and while it’s not as complex or rounded as the six year Heaven Hill, it does showcase great flavor and remarkable balanced for the price point. 100 proof. $15 [BUY IT NOW FROM DRIZLY] 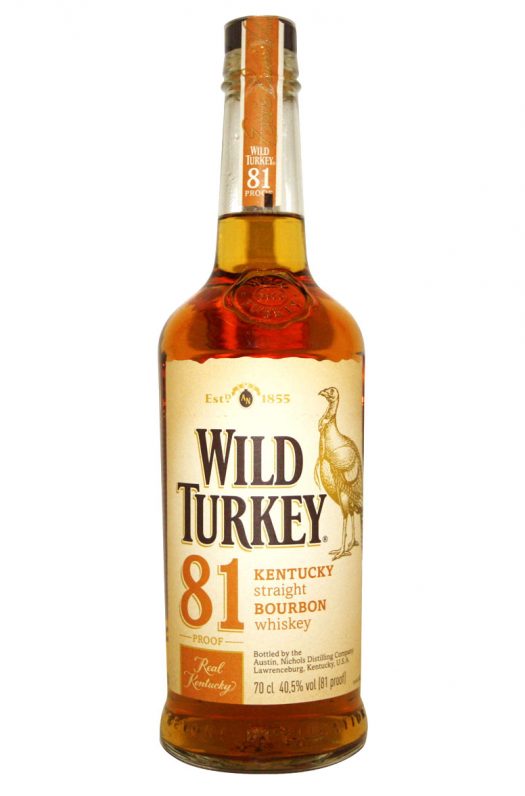 4. Wild Turkey Bourbon 81 Proof – It just wouldn’t be Wild Turkey without that extra 1 point of proof! While its hotter brother, Wild Turkey 101 Bourbon, packs more flavor for a few extra dollars, the 81 proof version is still a winner in the $20 and under category. It’s a blend of bourbons at least six years old, making it one of the oldest on this list. The lower proof helps to make it an easy sipper with a lovely caramel and vanilla body flecked with lemon, honeysuckle, and heather notes. There’s less rye influence than in any other Wild Turkey expressions, and while it lacks the frontier style of the 101, it still has a lot going for it. 81 proof. $20 [BUY IT NOW FROM DRIZLY]

5. Ancient Ancient Age Bourbon – Like so many bourbons, Ancient Ancient Age once held an age statement (as a 10-year-old product), but it was long ago reduced to “10 Star,” which doesn’t actually mean anything. The minimum age of the stock reduced over time; now it has settled in at a decidedly not-ancient-ancient three years old. That’s on the younger side, but this bourbon packs a surprising punch with a big caramel nose and a spicy, wood-heavy, and citrusy palate that produces ample body despite its relative youth. 90 proof. $17

6. Ezra Brooks Kentucky Straight Bourbon – Heaven Hill currently makes Ezra Brooks for Luxco, which just recently opened a new distillery in Bardstown, Kentucky to begin self-producing this and other lines in its portfolio. It’s a non-age-statement bourbon, but it has a slightly higher proof than most lower-shelf offerings. It’s basic and uncomplicated stuff with some unique apple notes, a strong vanilla character, and a good dose of cinnamon. For a few dollars more, Old Ezra Kentucky Straight Bourbon 7 Years Old shows a little more complexity and depth of flavor. 90 proof. $15 [BUY IT NOW FROM DRIZLY]

7. Old Forester Bourbon – Old Forester’s entry-level bourbon is a solid example of the high rye style, revealing big brown sugar notes, cinnamon Red Hots, and a slight peppery quality on the nose. The palate is all chewy caramel and a little orange zest. It’s a quality bourbon, if a little rough around the edges. For only a few dollars more, Old Forester Signature Bottled-in-Bond is an even more refined pour that would easily take top honors in the under $25 category. 86 proof. $18 [BUY IT NOW FROM DRIZLY]

8. Four Roses Yellow Label Bourbon – Four Roses’ entry level bourbon, referred to as “Yellow Label,” is bottled with no age statement and is blended from up to all 10 of the company’s different recipes (depending on supply and the season). It’s initially a bit brash on the nose, with plenty of youthful exuberance. On the palate, it’s quite sweet – think cinnamon sugar, chocolate-covered caramels, and just the lightest touch of honey-doused cornbread. It’s easy to see why this one is a favorite among bartenders. 80 proof. $18 [BUY IT NOW FROM DRIZLY]

9. Early Times Bottled-in-Bond Bourbon – Standard Early Times whiskey isn’t technically bourbon since a portion of it is aged in used barrels, but in 2017 a small amount of Early Times, aged to the specifications of bonded bourbon, was released by the brand’s owner, Brown-Forman. The nose has a modest barrel char note and a surprising level of spicy red pepper. Some cloves quickly find their way into the palate, and though there’s a bit of popcorn-heavy youth on the tongue, there’s also big brown butter, cinnamon, and lingering brown sugar notes — all the stuff of classic, if sugar-forward, bourbon. Early Times Bottled-in-Bond is not yet widely available (again, we suggest a visit to Kentucky), and it’s only sold by the liter (which keeps this one technically under our $20 limit for a 750ml bottle despite the price tag). 100 proof. $23 [BUY IT NOW FROM DRIZLY]

10. Old Grand-Dad Bourbon – Created by the legendary Basil Hayden to honor his own grandfather, Old Grand-Dad became a leading brand under National Distillers, surviving the demise of many other “old” brands during the difficult days of bourbon in the 70s and 80s. Part of the Jim Beam portfolio today, it’s a tried and true bourbon (albeit best as a mixer) that still holds its own despite being watered down to 80 proof in 2013. There’s a lot of corn in this one, on the nose and palate, and you have to dig deep to pull out some of the subtler baking spice and vanilla. For a bit more pocket change, Old Grand-Dad Bonded shows more nuance with the same lighter profile while Old Grand-Dad 114 proof gives an all-around bolder and richer flavor experience. 80 proof. $17 [BUY IT NOW FROM DRIZLY]