Old Forester, “America’s First Bottled Bourbon” has partnered with Bourbon Barrel Foods to launch its line of Cocktail Provisions, a collection of three bitters, two syrups and one tincture, all designed to elevate (but simplify) the home cocktail experience.

Created by Louisville-based Bourbon Barrel Foods and Old Forester Master Taster and Bourbon Specialist Jackie Zykan, Cocktail Provisions are inspired by the unique and robust flavor profiles of Old Forester. Taking the guesswork out of creating high-end cocktails, Zykan and Bourbon Barrel Foods have developed a cocktail line allowing consumers and trade to craft the perfect Old Fashioned, take the hassle out of Oleo-Saccharum syrup and elevate cocktails to new dimensions of flavor.

I’d like to say we’re going to taste all six of the items in the Cocktail Provisions lineup, but we actually only received one — the Old Fashioned syrup — which sounds decidedly simplistic next to something like a salt & pepper tincture. That sadness aside, we’ll dig into the syrup after we kick things off by correcting a longstanding oversight by reviewing Old Forester Signature, the 100 proof version of OldFo that is a standby of (affordable) cocktailing.

Old Forester Signature 100 Proof – Lots of dark chocolate on the nose, with hints of vanilla extract, graham crackers, and toasty cloves. A bit of heat is evident, but less than the typical bonded whiskey. The palate sees more of that chocolate, some baking spice, cherry notes, and a hint of barrel char — but none of that heavy-duty wood influence that you tend to see with OldFo’s annual Birthday Bourbon releases. In fact, I was surprised to see that I liked this much better than most of those, and I see a common thread between this whiskey and Old Forester 1920, though the latter is a bit fruitier. With its bold attack but silky finish, Signature is engaging from start to finish. Put it another way: It’s much better than it needs to be at this price. Best value. 100 proof. A / $22 [BUY IT NOW FROM DRIZLY] [BUY IT NOW FROM FROOTBAT]

Old Forester Cocktail Provisions Perfect Old Fashioned Syrup – Rich demerara syrup spiked with proprietary blend of three Old Forester bitters (ultimately giving it a 2% alcohol level). I have to say, this made for an amazing Old Fashioned (2 oz. Old Forester Signature, 1/2 oz. syrup), and it needed no doctoring at all, just whiskey and this syrup. Tasting the syrup straight reveals lots of cinnamon and nutmeg notes, and while those shine in the cocktail, here it melds with the whiskey to reveal chocolate and vanilla, clear complements to the Old Forester but bumped up a notch here. There’s a touch of orange peel, but if you like your Old Fashioned loaded with fruit, you’ll want to toss a slice of orange and a cherry in there before mixing. For my part, I like it just the way it is. A / $8.50 per 2 fl. oz bottle 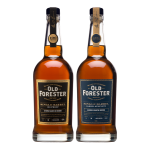 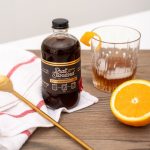