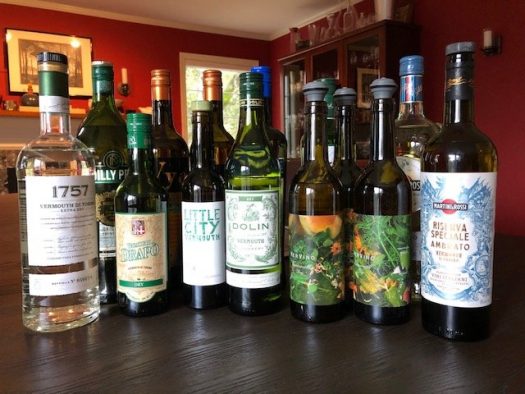 In keeping with some of our recent roundups — you now know what the best banana liqueur in the world is — I figured I’d take on another big staple in the cocktail world: dry vermouth. The catch? There are way more vermouths on the market than there are banana liqueurs, and before I knew it I had more than a dozen bottles sitting on my desk. Listen: Nobody likes vermouth that much (especially dry — green bottle — vermouth).

But a decision had been made, and away I went, testing all 16 over the course of two days to figure out which one was best — both on its own and in a martini. (For the purposes of this review, all martinis were made identically with Roku gin, stirred, and mixed in a 6:1 ratio of gin to vermouth.)

Before we get to the tasting, what exactly is dry vermouth, anyway? All vermouth is fortified, aromatized wine that is infused with any number of herbs, spices, and other botanical ingredients — with wormwood originally the ubiquitous ingredient among them. (The word vermouth actually comes from the German word for wormwood.) That said, many vermouths no longer contain wormwood due to the long-running controversy over absinthe and its reputation for crazy-making, and since very few vermouth creators reveal their ingredients, it’s virtually impossible to know which ones do contain it. Probably not many.

Dry vermouth originated in France, but today it is made just about everywhere, including Italy, Spain, and the U.S., both of which are represented below. Vermouth can be a simple infusion of botanicals, wine, and a little grain alcohol, or it can get much more complex, with redistillation or aging and intentional oxidation to mature the finished product. Vermouth is also sweetened with some form of sugar, and you’ll ultimately find a wide range of sweetness in so-called “dry” vermouths. And you do know how to store your opened vermouth bottle, right?

So, that’s the education, now let’s dive into the tasting. These vermouths are presented in largely random order, though I’ve grouped different products from the same company together. These are spot reviews in a comparative setting, so notes are limited. Two ratings are offered — one for the vermouth on its own, one in our test martini. Links to our full reviews can be found below, where available.

Noilly Prat Extra Dry Vermouth – $11 – This is the U.S. recipe; the French one (just “Dry”) is considerably different. “Crafted using a secret recipe of fine white wines, blended with 20 herbs and spices that are carefully sourced from around the world.” On its own, it’s reminiscent of Lillet, quite floral with notes of citrus peel, though well oxidized, and the finish feels off. B In a martini, I didn’t like Noilly Prat at all; it gave the cocktail a bitter attack and a weird, apple cider character later on. C-

Dolin Dry Vermouth – $13 – Ugni blanc is the base wine, but “the Chambéry style emphasizes the botanicals (whereas, at least classically, the Torino style was just as much about the wine as the botanicals).” Served solo, it’s very heavy on the citrus; brisk and engaging, with an absinth-y anise edge. A- A martini was just as good, though herbal notes were more prominent and the citrus got lost here. A classic choice. A- [BUY IT NOW FROM DRIZLY]

Martini & Rossi Riserva Speciale Ambrato Vermouth – $23 – Like all of Martini & Rossi’s vermouths, this is a blend of “trebbiano wine from Emilia Romagna and catarratto wine from Sicily,” though Ambrato has a light sweetness owing to the addition of a touch of moscato d’Asti. Served solo, the bright yellow vermouth is a bit sweet, with melon and lemon overtones; it’s refreshing and quite enjoyable. A It makes for a surprisingly neutral and well balanced martini, again with an herbal bent. A- [BUY IT NOW FROM DRIZLY]

Martini & Rossi Extra Dry Vermouth – $9 – This is probably the best-selling vermouth on the market, and one of the cheapest. On its own, it doesn’t impressive, sour and heavy with oxidized wine notes, pungent and funky with a vegetal note. C+ That said, it shines surprisingly nicely in a martini, letting the gin show clearly with a gently bitter, verdant character as a top note. A-

Martini & Rossi Bianco Vermouth –  $9 – This one’s an outlier in this roundup, as this is made in the sweeter bianco style. M&R sent it our way so we figured we’d test it anyway. On it’s own, it’s sweet and pungent (but pleasant, as intended of a sweeter style vermouth), with ample citrus peel in the mix. B+ I was surprised how well it worked in a martini, too, where the sweetness wasn’t nearly as noticeable as I expected, despite a clear punch of sugar on the finish. B+

Boissiere Extra Dry Vermouth – $9 – The “proprietary blend of wine based distillate infused with select herbs and florals such as chamomile, elderflower, and coriander has been a closely guarded secret.” Solo, this one’s a miss: watermelon jolly ranchers and an overbearing sweetness were off-putting to an extreme. C- I didn’t care much for the martini, either, where a bizarre nose blended florals and licorice notes into a weird cocktail. B-

Lionello Stock Extra Dry Vermouth – $8 – “The wine originates from the cradle of vermouth in the Piemonte region, known for its delicate, velvety, indulgent flavors.” On its own, this is a simple, straightforward vermouth, citrusy, lightly herbal, with a bitter finish. As expected. B+ It disappears nearly completely into a martini, where the gin shines above all else; that bitter finish is still in play, though. B+

Vya Extra Dry Vermouth – $23 – Vya’s dry vermouths use a fairly “neutral dry white which can vary depending on the winemakers’ taste test and have included chenin blanc and colombard” in the past. Made with “angelica, orris, linden, lavender and more.” This was one of my favorites on its own, clearly herbal, a little sweet, a little spicy, and a little fruity. Great balance all around. A- It makes a stronger impact in a martini, where its herbal notes are more pronounced. A solid all-around choice. A- [BUY IT NOW FROM DRIZLY]

Vya Whisper Dry Vermouth – $23 – A newer vermouth from Vya, designed to be softer and less herbaceous than Extra Dry. 15 botanicals include “linden, orris, elecampane, and needles from a certain fir tree that contribute a soft forest-like character.” Odd that on its own I found its herbal punch plenty aggressive, particularly on the bitter finish. B I did however love the Vya Whisper Dry martini, which cam across as classic, bittersweet, with gentle florals and a nice salinity that I didn’t get elsewhere. Arguably the best-balanced martini ingredient in the lineup. A [BUY IT NOW FROM DRIZLY]

Cinzano 1757 Extra Dry Vermouth – $32 – “Features only Italian wines enriched with a botanical bouquet featuring Artemisia (wormwood) from Piedmont.” Iconically old-school on its own, very winey with oxidized, sherry-like notes prominent. B+ This flopped in a martini, where that pungent wine totally took over, making for a pushy and pungent cocktail. B-

VerVino Variation One Batch #4 Dry Vermouth – $28 (500ml) – VerVino is a vermouth made by Channing Daughters, or, I should say, it’s a series of vermouths made by the company, which sent us three different variations, all wildly different. Variation one is a base of sauvignon blanc with 30-plus botanicals, including calendula, fennel, sage, nasturtium, lemon balm, rose, basil, black birch, chives and spiked za’tar. Really fun on its own, with notes of overripe peaches and potpourri giving it an unexpected character. A- It also worked well in a martini, where the herbal elements shined brightest, giving it a peppery and boldly spicy attack. A-

VerVino Variation Two Batch #4 Dry Vermouth – $28 (500ml) – Also sauvignon blanc, with 30-plus botanicals including thai green chili peppers, paper lantern habaneros, jalapeños, borage, tarragon, cucumbers, angelica and zucchini blossoms. I was surprised how boldly fruity this was on its own, though tons of flowers made it quite expressive. It’s well-built as an aperitif, but the finish is dull. B+ Big florals and buttered popcorn notes made the Variation 2 martini a bit off-putting, but still approachable. B

VerVino Variation Five Batch #3 Dry Vermouth – $30 (375ml) – “Base of white wine, usually a blend like our Mosaico,” with 30-plus botanicals include musk melon, peaches, flowering basil, flowering dill, lemon balm, papalo, lemon verbena and more.” I thought this was terrible on its own, very bitter and unbalanced, funky and quite sour. D+ A bit better in a martini, but still not drinkably so: very green, bitter herbs dominate. B-

Drapo Dry Vermouth – $17 (500ml) – Built on a base of trebbiano wine. Served solo, the vermouth has a curious cola note, and quite a spicy character — ginger, perhaps. B+ The Drapo martini is quite floral and herbal, though it comes across as a bit indistinct. B

Little City Dry Vermouth Batch 7 – $22 (375ml) – Made from the Cayuga White grape, a cross of Schuyler and Seyval Blanc, with 38 botanicals. Notes of cinnamon and eastern spices give this an exotic construction, its lengthy finish evoking lemon oil. B In a martini, it comes across as boldly perfumed, heavy with roses and quite exotic, with a spicy kick on the finish. B+

Gonzalez Byass Vermouth La Copa Extra Seco – $23 – Based on 100% palomino grapes. Served solo, this vermouth drinks a lot like a sherry (which makes sense, considering its origins in Spain), with a heavily oxidized note that’s packed with a smattering of green herbs, cloves, and anise. B The La Copa martini packs quite a punch, with lots of spice and peppery aromatics. It’s a top pick if you really want a racy cocktail. B+

I was unsurprised to find that Martini & Rossi’s Riserva Speciale Ambrato was my favorite vermouth on its own, as it had the best balance of flavors in the lineup, drinking like a spicy spin on a glass of your favorite white. It also works very well in a martini, but here the competition is much closer — and, since no one ever drinks dry vermouth solo, this is really where it counts the most. Putting my top finalists of M&R’s Ambrato, Dolin, Vya Whisper Dry, and VerVino Variation One all head to head, blind in one final martini showdown, the winner surprised me: Martini & Rossi Riserva Speciale Ambrato was again my favorite, with Vya Whisper Dry close behind — both just let the gin shine clearly, informing it with a light hand of fruit, herbs, and bitter elements. That said, taste is always suggestive. My wife had a fondness for the much bolder, anise-scented Dolin. Ultimately you’ll have to experiment to find what works for you.

What’s clear in all of this: Good vermouth costs real money. All of my favorite bottles cost considerably more than the $8 or $9 you’ll pay for a bottle of the bottom-shelf stuff. But even as a rinse, I think it’s worth it.

So that’s the dry vermouthiverse, but rest assured, we’re not done. God help me, I’ll be doing a roundup of sweet vermouth in the near future…