Back in 2011, I took my first trip to Kentucky, endeavoring to visit every distillery that was open to visitors at the time. Since then, a lot has changed, as bourbon mania has led in turn to bourbon tourism mania. In the last seven years, the region, and the Bourbon Trail itself, has exploded with new distilleries, bigger visitor centers, and enhanced touring experiences.

On a recent visit to Kentucky, I re-toured a few old faces plus one of the new guard, to see how the picture of Kentucky had changed in the intervening years. Fresh thoughts on each of the four distilleries we visited follow — though note, there is plenty more going on in Kentucky beyond this! 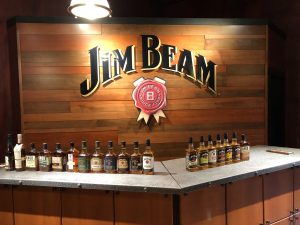 Beam built a new visitor’s center in 2012, tripling the size of its old space (the old center is now the tasting room). It’s also wildly revamped its tour, thanks to the construction of a miniature version of the Beam fermentation tanks and column still. In this mini-distillery, visitors can get the full distilling experience on a more manageable scale — though the setup is fully operational and actually making whiskey. As the lengthy tour continues, visitors get to physically turn out (some of) a barrel of Knob Creek, sanitize a bottle of KC Single Barrel on the bottling line, and put their own thumbprint into its wax seal (presuming you want to actually buy said bottle). Afterwards, well over a dozen of Beam’s products are available for tasting via tricked-out wine bar dispensers: Insert your key card and the dispenser ejects a bit of Baker’s, Knob Creek, or even, god help you, Jim Beam Vanilla — everything but Booker’s, really — into your tasting glass. Three samples max! (That’s the law!) 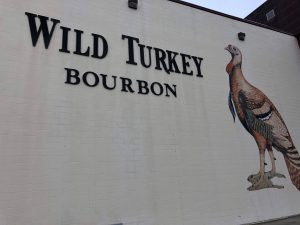 Like Beam, Wild Turkey recently upgraded its visitor’s center, dramatically increasing its size and installing a tasting room that overlooks the Kentucky River from several hundred feet up. It’s a breathtaking space, though you might miss it if you spend too much time chatting with legendary distillers Jimmy and/or Eddie Russell, who are seemingly fixtures here, happy to chit-chat with just about anyone who happens inside. Wild Turkey’s tour is quick and informative, ending with a tasting of four of Turkey’s products — none of which, oddly, is its flagship 101. 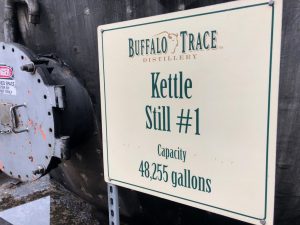 Buffalo Trace never seems to stop moving, and though this was my third visit to the distillery, I saw nothing but new features on a private tour. The first stop was BT’s gargantuan new warehouses, which are still being painted as they’re being filled with whiskey. Barrels were being rolled into the ricks right in front of us, trucked up from the distillery just downhill. (Check our Instagram for some video.) The distillery will build a new warehouse every five months for the next ten years, clearly a sign that it thinks bourbon mania isn’t about to let up. The other attraction — and one which regular visitors can actually experience — is the distillery’s “Bourbon Pompeii,” an excavation of the original OFC Distillery, on top of which Buffalo Trace was (much later) built. The ruins of the original fermentation tanks and bits of stills have been unearthed and preserved in a full museum-like experience on the BT grounds. It’s a fascinating journey back to nearly 150 years ago that any whiskey (or history) fan should experience should they find themselves at the distillery. 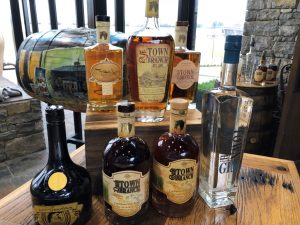 The young gun of this mix, Town Branch’s brewery/distillery opened only in 2012 as an offshoot of its parent company Alltech. It’s unique because a) it’s in the city of Lexington, not out in the boonies, and b) it started off as a beermaking operation. On a tour here you can see both sides of the street (literally), seeing the (very small) brewery and tasting a number of its products (including its whiskey barrel-aged beers). Next you can visit the distillery, where two copper pot stills are used to create not just bourbon, but single malt whiskey, gin, and, now, rum, which was fermenting on site during our visit. Town Branch’s spirits tasting is impressive, running through all of the above (including an imported rum and Irish whiskey). While the distillery has not won many plaudits for its lackluster rack bourbon, its single barrel bourbon expression is a delight, as are both of its single malts (particularly the reserve expression), which are aged not in new oak but in its twice-used bourbon/beer barrels, proof that new oak makes a tragic mess out of single malt. Best of all, it’s all about a mile from downtown Lexington, making it easy to get in and out of.

The Kentucky Bourbon Trail: Tips, Tricks, and Advice for the Traveler