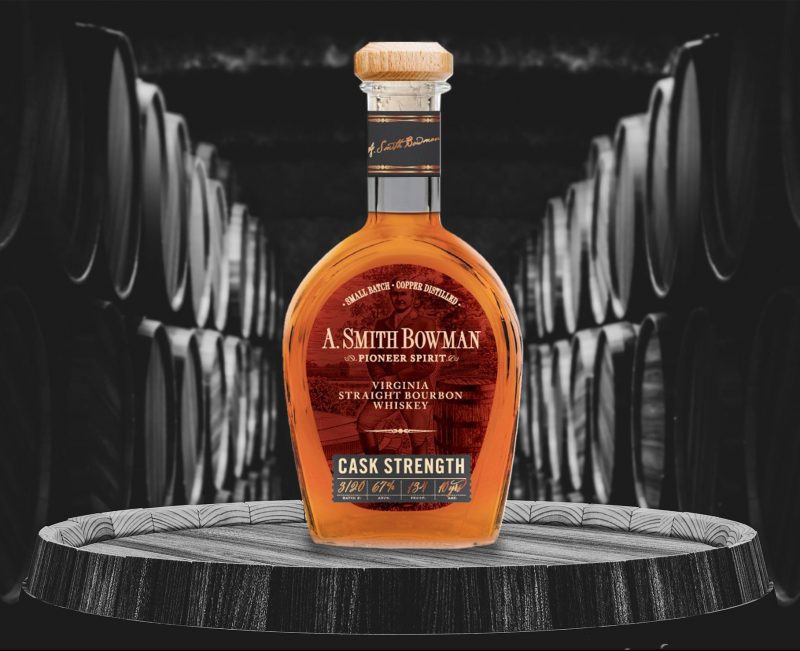 We’ve long been impressed with the bourbons rolling out of Virginia’s A. Smith Bowman distillery. While new, hyper-rare limited edition releases under the Abraham Bowman label come around roughly once a year, there hasn’t been any change to the lineup of their core portfolio since the addition of Port Finish in 2017. Now the distillery is expanding its offerings again with the permanent addition of A. Smith Bowman Cask Strength Bourbon, an annual release aged for a minimum of ten years and bottled uncut and unfiltered.

For the inaugural Cask Strength release, Bowman is coming out guns blazing with one of the highest proof offerings I’ve ever seen. Bourbon nerds dub a whiskey this high proof “hazmat” since any alcohol content over 70% means it is technically flammable. Airlines won’t let you fly with it. Despite those apparent hazards, bourbon fans can’t get enough of this stuff, so Bowman is definitely tugging at their heart strings with this one. According to Master Distiller Brian Prewitt, this bourbon is a blend of barrels that actually came from the lower tiers of Warehouses A1 and A. I can’t imagine what kind of proof you’d find in barrels from the high floors! Anyway, Bowman was nice enough to send us a sample. After checking the office for any open flames, I felt I was ready to crack into this one. Here goes!

On the nose, this thing is dark and toasty with a rich sweetness. The alcohol is remarkably restrained given the proof. Notes of barrel char, candied bacon, and dried apples comprise the more savory component, while hints of dark vanilla bean and brandied cocktail cherries add a welcome sweeter quality that builds as things open up. The expected blast of throat scorching warmth is nowhere to be found on the palate. Had I sipped this blind, I would never have guessed this bourbon was anywhere near its stated alcohol content.

The palate kicks off with molasses, dark caramels, and juicy raisins before transitioning to lighter notes of butterscotch and dryer notes of pecan shells and barrel char on the mid-palate. The spice builds steadily with Red Hots and clove but never overtakes the other flavors, dissipating into a smoldering, oily finish of chocolate-covered cherries and toasted coconut. Water may seem obligatory with this one, and while it does kick things up with more fruit and a brighter sweetness, neat sipping is definitely not out of the question. Fantastic stuff and one of the best new bourbon releases in years.

The price is a bit steep for a 10-year-old whiskey, but this one easily ranks right up there with some of Sazerac’s other highly-coveted, cask strength bourbons like George T. Stagg or E. H. Taylor Barrel Proof. I’m sure retailers will have this one priced at double the suggested retail in no time. And for once, I honestly can’t blame them. Apologies in advance.