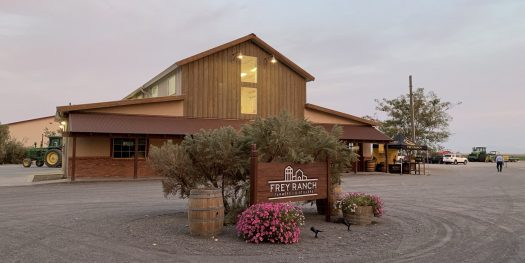 When Frey Ranch distillery, based in Fallon, Nevada, released their first four-grain straight bourbon in December 2019, we at Drinkhacker were instant fans. (We also reviewed their follow up rye and single barrel bourbon #22). The whiskeys stand on their own merit; and a recent visit to the idyllic working ranch and their first annual Whiskey Harvest only highlighted and accentuated what we were clued into from their first offering.

Frey Ranch started out of the gate producing great whiskeys, utilizing generations of intimate knowledge of, and great respect for, the very land and the crops they’ve been cultivating since 1954 (with experience on other Nevada lands going much further back). It’s evident in every detail throughout the ranch and it’s production facility.

The quick history is this: In 1864, Lawrence Frey was one of the first to be deeded property in Nevada. Subsequent generations of Freys have remained in Nevada, active in ranching, farming, and trade, with the current location in Fallon having been acquired by Charles P. Frey, Sr. in 1954. Under the current helm of the distillery co-founders Ashley and Colby Frey, the ranch recently made the pivot to an exclusively grain-to-glass spirits producer where the grains are grown on property, and the whiskey is produced, distilled, and bottled on site, in facilities that are mere steps from each other.

Of the 1500 acres on the property, 500 acres currently are used to grow the grains for whiskey. The water source for irrigation is snow melt from the Sierra Mountains which feed into the Fallon River. Colby commented that as a farmer, you only get one shot a year to see what worked and what didn’t. The ranch has generations of trial and error to guide them through every new growing seasons. And how important is the grain component to Frey in the overall whiskey scheme? The label on their bottle is inscribed with the motto “be good to the land and the land will be good to you.” Their master distiller Russell Wedlake is first and foremost a certified crop advisor with 25 years of agronomy experience and deep understanding of grains and fermentation. 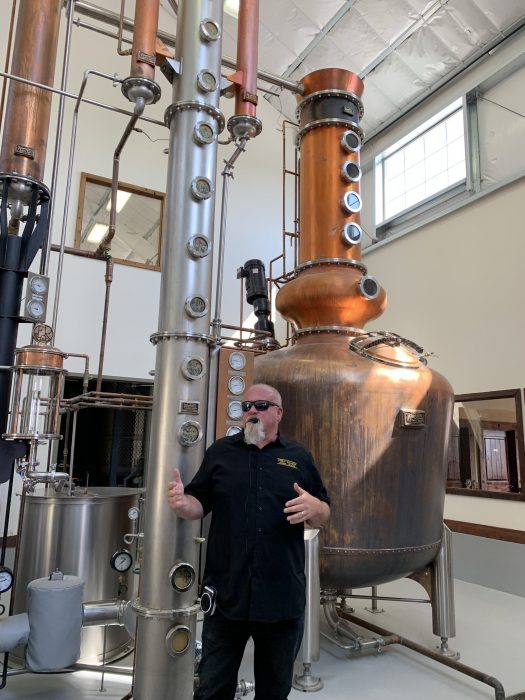 True to form, the meticulous Frey team uses the traditional single pot distillation process, which takes about 8 hours and produces about 1000 gallons at a time, in lieu of the more efficient and higher capacity continuous distillation. New American oak barrels (which are legally required of bourbon) are charred using a two-char method — char 4 on the staves and char 3 on the barrel head.

The bottled bourbon and rye are 90 proof and 100 proof respectively. We were treated to tastings of each straight out of the barrel at roughly 130 proof. These barrel pours offered intriguing insight into the characteristics the distillery has to work with before bottling. The nose on the bourbon features cut grass, burnt sugar and minty herbal note with a touch of thyme; the palate is a powerhouse of nuttiness, mint, leather, raisins, poached pear, blondies, cherry pop rocks, and cola. Really, it has it all. The finish is meaty and savory. The nose on the rye is similarly punchy with grass and a sweet-tart kick of citrus akin to lemon meringue or key lime pie; the rye palate offers a rich mouthfeel with pecan pie and custard, creamy licorice, while the finish lingers with musky Port notes. 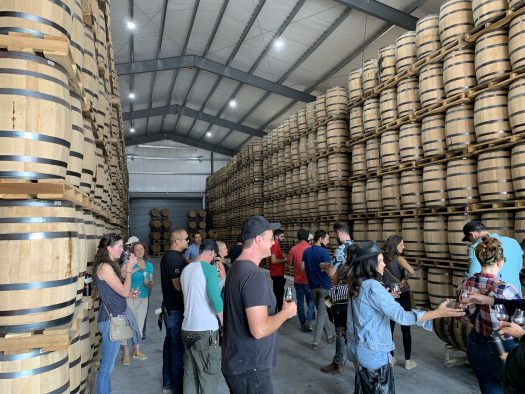 There are already about 12 new whiskeys aging here and some are releasing soon, which include single grain offerings (100% wheat, 100% oat, 100% corn, and 100% malted corn), a quad malt (four-grain bourbon with all grains malted), a few smoked varietals (malt, oat, and rye), five-grain (which adds oat to their four-grain bill), and other four-grains with different mashes of grains and triticale (a wheat-rye hybrid grain).

The tour led us through every corner of the property, from its main production complex, its vast growing fields of late season corn, the grounds of the main house where the Frey family lives, and various fun nooks and crannies along the way that showcase such things as a well kept collection of John Deere tractors used by generations on Frey lands, plus Ashley’s personal pumpkin patch. 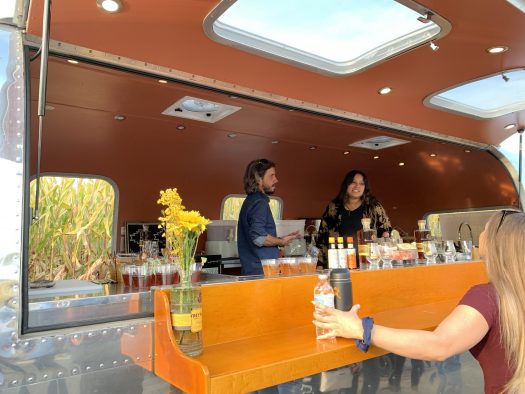 And I’d be remiss if I didn’t touch upon a few highlights of the Whiskey Harvest, which particularly charmed this life-long city dweller: shooting corn out of corn cannons, dust-raising wheelies on golf carts, the glow of Frey’s signature bottles repurposed as lanterns at every turn, and sipping on artisan cocktails served from an airstream bar tucked in a carved out corner of the cornfields with live music. My favorite cocktail was the aptly named Ranch Hand, a take on The Gold Rush: 1.5 oz Frey Ranch Bourbon, 0.75 oz fresh lemon juice, 0.5 oz honey syrup (2 parts honey, 1 part warm water), and a dash of aromatic bitters, shaken with ice then strained. Garnish with fresh lemon peel. 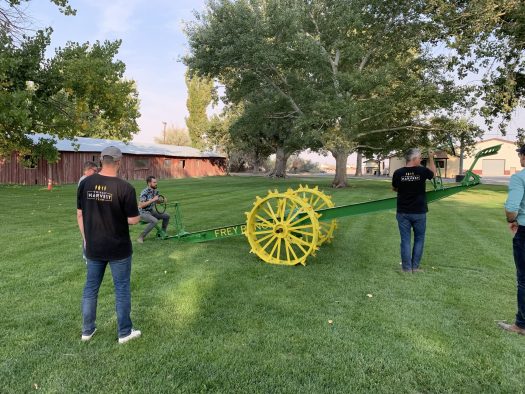 Colby has been described by some of his colleagues and business associates as a perpetual and passionate tinkerer (as exemplified by various re-imaginings of tractor parts, one notably turned into an ice cream machine, another a see-saw). Ingenuity coupled with a sleeves-rolled-up/hands-in-the-dirt ethic is most certainly a driving spirit behind Frey’s successful entry into an already competitive landscape of whiskeys, and bourbon in particular. There’s plenty of reason to cheer for its success as both an independent agriculture endeavor and a craft distillery, and it’s a clear outfit to follow in the grain-to-glass category.

Frey Ranch hosts tours every Saturday from noon until 4pm and regularly host events and runs promotions in the tasting room. Distribution is currently only available in California and Nevada, with the straight bourbon, rye, and single barrels available on their online store.