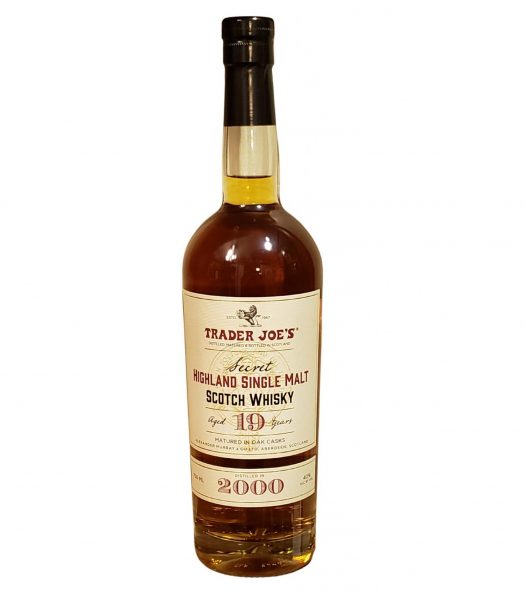 Every holiday season, Trader Joe’s partners up with independent bottler Alexander Murray & Company, releasing a limited run single malt that is of higher quality than their usual offerings. Recent releases included a Glen Moray, a Glenallachie and an Ardmore, all at lower prices than their distillery-originating counterparts. This year’s offering was a “secret” malt from the Highland regions, which is less enigmatic than advertised (more on this in a moment). Our local shop still had a few bottles in stock, so picking one up was a no-brainer. Let us proceed with this less-than-timely consideration.

The nose is soft and inviting, full of lemon and orange zest. Some water delivers a prominent appearance of mild vanilla and biscuit, but nothing too off-putting. There is not much heat on the palate, where the malt sweetness dominates before a finish of apple, pear, and waxed wood. At 80 proof, this is as accessible and inviting as an excellent introductory malt for those uninitiated, but a higher strength bottling would have undoubtedly provided a flavorful punch.

As to the “mystery” of where this expression originates, the bottle’s back label provides some clues:

“This distillery is one of the oldest and most traditional distilleries in the Highlands of Scotland. Designed by Industrial Designer Charles Doig, built near a railway and sourcing its water from a burn.”

Jinkies, Scooby. While there is always room for doubt, a quick Google search appears to confirm quite readily that this fits the profile of Balblair distillery. Established in 1790, Balblair was rebuilt near the Edderton railway station in 1895 by Doig, and sources water from a nearby burn. Whatever the source, one would be hard-pressed to find something of this quality, at this age statement, at this price point.