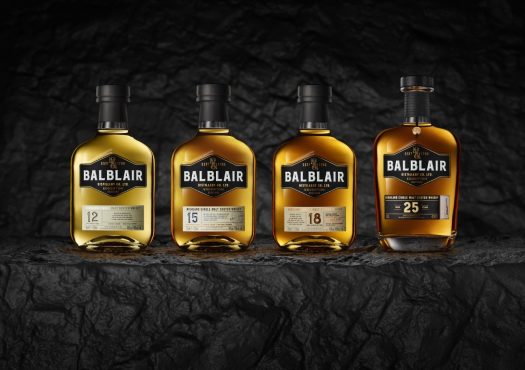 Previously known for its practice of releasing vintage-dated rather than age-stated whiskies, Highlands whisky distillery Balblair has revamped its portfolio and fallen in line with just about everyone else, refocusing on traditional (and more easily sustainable) age statement products. The new line includes four single malts, replacing all existing Balblair expressions — though the distillery says the whisky hasn’t changed and remains as high in quality as ever.

Bottles have also been revamped: “Inspired by Balblair’s rich past, the packaging for the new collection is reflective of the distillery’s unique and idyllic location. It takes subtle cues from the surrounding landscape: its pure Highland water source and the Pictish ‘Z-rod’ carvings etched on the ancient Clach Biorach standing stone located on the distillery’s doorstep. A larger logo area and new label font has also been incorporated into the design to create greater on-shelf brand visibility.”

We received the full lineup for review. Thoughts follow.

Each bottling is 92 proof.

Balblair 12 Years Old – Matured in American oak ex-bourbon and double-fired American oak casks; this is the only expression in the new range that does not see some time in sherry casks. Balblair’s entry-level offering kicks things off on a high note: Boldly chocolaty on the nose, with lots of caramel and notes of fortune cookies, the whisky segues into very gentle notes of baking spice, fresh-cut barley, and a honeyed element that sweetens up the well-oiled body. There’s more complexity here than you’d think, and as an everyday sipper it acquits itself pretty much perfectly. A- / $70 [BUY IT NOW FROM DRIZLY]

Balblair 15 Years Old – Matured initially in American oak ex-bourbon casks, followed by first-fill Spanish oak butts. The sherry influence here is surprisingly bold, the nose showcasing a leathery austerity that pairs nicely with a sedate orange peel note and some sesame oil elements. The palate doubles down: Aggressive notes of leather baseball glove, green oak, and a sharp orange element that spices things up considerably as the finish arrives — a bit on the punchyside and somewhat herbal, with notes of graphite and some asphalt. B+ / $120 [BUY IT NOW FROM CASKERS]

Balblair 18 Years Old – Another American oak-aged whisky, finished in first-fill Spanish oak. As expected, this has a stronger sherry punch than the 15 year old, though the two whiskies share some DNA. The nose sees the wine influence better integrated, making for a nutty, punchy experience with classic notes of oily furniture polish. Richly fruity with ample chocolate notes studded with dried fruits, the whisky is huge with flavor, winding up to a bold, nutty, and soothing finish that clings to its wine elements as it fades out. A- / $210

Balblair 25 Years Old – The main event is matured initially in American oak ex-bourbon casks then finished in Oloroso sherry Spanish oak. It’s a powerhouse on the nose, with notes of menthol, saddle leather, tobacco leaf, and cigar box all in slurry. A gentle smokiness perks up, complementing the heavy wood notes, giving the dram an (appropriately) austere construction. On the palate, the whisky never disappoints, offering (again) a bold chocolate note, and a surprising amount of fresh fruit. It’s filled with citrus, plums, dates, and cherries, sliding gently into more austere elements of oiled cedar, almonds, and mint tea. It’s a delight through and through, and tough to put down. A / $700