Review: Not Your Father’s Bourbon 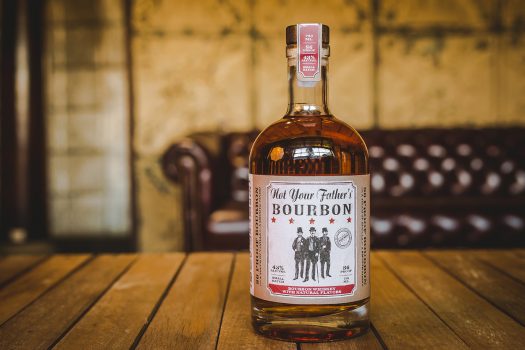 After giving alcoholic root beer, ginger ale, and cream soda a spin, the “Not Your Father’s” brand has moved on up to hard spirits. Its first product in the category is an obvious one: Not Your Father’s Bourbon, a flavored bourbon which claims “a touch of vanilla” as its only adulterant.

Let’s give it a shot.

The nose is plenty sweet, with notes of sugar cookies, ample vanilla, and hints of cinnamon red hot candies. It’s whiskey, to be sure, but particularly bourbonish notes are elusive; though the hint of caramel corn and some rustic burlap notes at least nod in that direction.

The palate is well-sweetened although, perhaps, it is indeed “not too sweet” as the label indicates. For those with a distinct sugar fixation, NYFB will hit the spot with a candylike vanilla hit, a light note of milk chocolate, cinnamon, and a more evident popcorn note. The finish is on the racy side, again calling back more to cinnamon than vanilla, though both linger on the tongue.

It’s perfectly acceptable for a flavored whiskey, nothing to write home about but harmless, at least as a mixer, though one has to wonder: What was wrong with your father’s bourbon? It wasn’t sweet enough? Hands down I prefer my bourbon with less sweetness than this, as sugar tends to overpower the more delicate flavors that the whiskey might possess.

The back label of the bottle asks, “Why do flavored whiskeys always taste more like the flavor than the actual whiskey?”

To which I reply, “Why flavor the whiskey at all?”

B- / $25 / smalltowncraftspirits.com [BUY IT NOW FROM DRIZLY]

Not Your Father's Bourbon