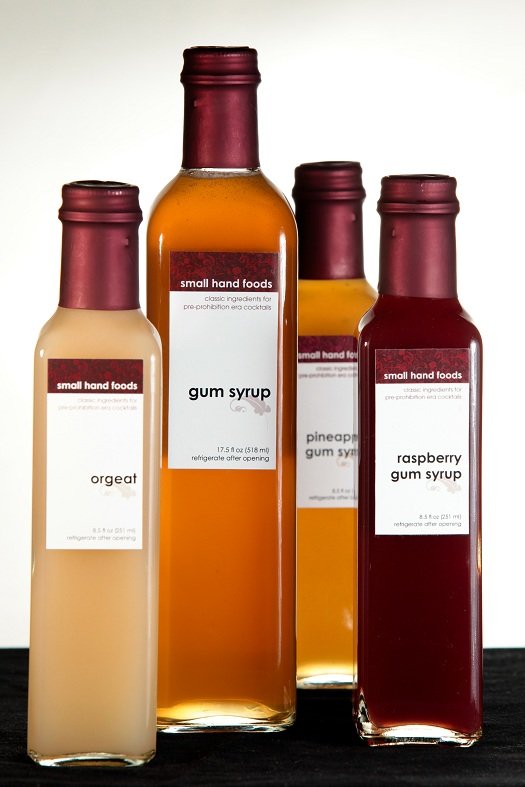 The thing about gomme (awesome word) is that when you’re perusing cocktail recipe books, everything seems to call for it. But when you actually get some gomme, you can’t find a thing to make with the stuff.

I’ve had Small Hand Foods’ line of gommes, or gum syrups, sitting on the counter of Drinkhacker HQ for months, with nothing to do with them. Finally I made, you know, an effort, and cooked up a variety of cocktails with the stuff so I could review them before they, you know, expired. (Recipes follow, courtesy of Small Hand Foods.)

Gum syrup is a lot like it sounds: Syrup that is thickened considerably by the addition of gum arabic. Unlike regular sugar syrup, gum syrup adds viscosity to a drink, and on its own it is noticeably more mouth-filling. The catch: Who has gum arabic handy when you need it?

Small Hand Foods comes to the rescue with pre-bottled gommes: an unflavored version, and the more intriguing pineapple gum syrup and raspberry gum syrup. The company also makes orgeat (almond syrup) and grenadine, neither in “gum” versions (and neither reviewed here).

As for the three gum syrups, all are impressive and work well in the cocktails that call for them. I tried them alone and in recipes. They’re wholly as intended: Thick, viscous, and quite flavorful. The flavors are all more aged than I’d expected: The standard gum syrup has a rich, caramel character to it, and that translates through to your drink, like it or not. Huge, authentic pineapple and raspberry notes are found in the flavored versions, though clearly neither is quite as tasty as fresh fruit macerated in syrup would be. They also bear the same aged sugar character as the standard gum syrup, which is unusual, but adds an interesting spin to a cocktail.

All told these are excellent cocktail ingredients. Shortcuts, to be sure, but when a recipe calls for gomme, who else are ya gonna call?

Shake vigorously and strain into a chilled coupe glass. Garnish with a lime twist.

Add all ingredients to mixing tin and shake vigorously without adding ice. Then add ice and shake again. Double-strain into a chilled coupe glass.

Review: Tippleman’s Not Quite Simple Syrups
Posted in Buy It Now, Mixers/Non-Alcoholic, Rated A-, Recipes, Reviews