Can an $8 bottle of Hiram Walker Triple Sec really go toe to toe with the gold standard of curacao, Cointreau? Hiram thinks it can, and sent a bottle of its budget orange liqueur to taste side by side with Cointreau, which at $35 is more than four times the price.

In a nutshell: Yeah, it pretty much can.

Mind you, I love Cointreau and use it in all manner of cocktails where orange is required, but the price is pretty gaudy. Luckily you use so little a bottle of Cointreau typically lasts for three or four years in the average home bar.

But let’s say you’re drinking margaritas every night. What to do? Maybe an $8 triple sec is a better pick.

Side by side, I expect most tasters would struggle to pick out which is which. The most notable difference is proof: Cointreau is 80 proof and Hiram Walker is 60 proof, and you can taste the extra alcohol in the Cointreau. Cointreau also has more of a bitter edge drawn from orange peel, which Hiram’s triple sec has more of a bold, tangerine character that really tastes of fresh juice. Very sweet and lush.

Now a bottle of Hiram Walker may not impress anyone with its garish colors and dated bottle design, but if you were to, say, pour a bottle of Hiram triple sec into an empty bottle of Cointreau, well, I wouldn’t tell anyone you did it. 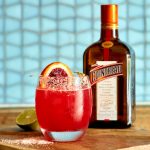