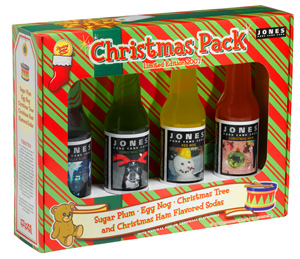 Yes, Virginia, there is life beyond Mountain Dew. Renown for its Turkey & Gravy and Brussels Sprouts carbonated concoctions released for the holidays, Jones Soda (motto: “I dare you.”) has come up with two new packs for 2007, one for Christmas and one for Chanukah, each containing four bottles of curiously holiday-flavored soda. In this first post, I’ll tackle the Christmas pack. Rest assured, Chanukah will be coming up soon… I’ve already been warned about the Latke Soda.

Jones Soda Christmas Tree: Definitely odd, not terrible. It tastes like it’s lost its fizz, but maybe its the auto coolant-green color that’s messing with my mind. Tastes less like an actual Christmas tree and more like a car air freshener in the shape of one. C

Jones Soda Christmas Ham: The main event, to be sure, and exactly what you’re expecting. It doesn’t taste like ham, it tastes rancid, salty sweet, and just plain nasty. I take comfort in the fact that it is kosher, so there’s no actual ham in it. I took the rest of the bottle to a party that night. I highly recommend doing so just to check out the look on people’s faces when they take their one (and only) sip. F

Jones Soda Egg Nog: A surprising win. I probably wouldn’t drink it every day, but it’s got a nutmeg and eggy flavor that isn’t all that bad, and I dislike eggnog greatly. Sweet, but not overly so. B+

Jones Soda Sugar Plum: Emphasis on sugar. Tastes like chemical blueberry over plum, more like a liquefied Pop-Tart or something. Hard to get through the bottle, but kids will dig it. B-

So there you have it. I don’t feel too bad panning some of these because I think Jones Soda would agree they aren’t really meant to be consumed. They are, however, meant to be purchased: A minimum of $10,000 of the proceeds of sales of this pack will go to Toys for Tots. So buy some… and drink up if you dare.