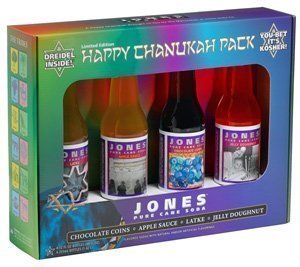 As previously promised, here is your coverage of the flipside of the Jones Soda Christmas Pack: The Jones Soda Chanukah Pack, loaded with four bottles of pop: Apple Sauce Soda, Latke Soda, Jelly Doughnut Soda, and Chocolate Coins Soda, plus a plastic dreidel. Here’s how they stack up against the gentiles.

Jones Soda Apple Sauce: I eased into things with an easy one. Surprisingly like apple sauce (and not just apple juice), quite authentic, like someone somehow carbonated and liquified apple sauce. B

Jones Soda Latke: Yes, I’d been warned. The smell wasn’t heinous, and quite a bit like potato pancake. It didn’t smell all that bad, unlike the Christmas Ham soda from the Xmas pack. But one taste and your mind is changed. It tastes not like potatoes but potato juice, like that stuff on the plate after you microwave a baking potato for 12 minutes. And it looks like potato juice, too. Rancid, oh-so-disgusting. D-

Jones Soda Jelly Doughnut: Is this really a key component of Chanukah? Anyway, the soda really does taste like jelly, not so much like doughnuts. What kind of jelly is hard to describe. Maybe strawberry, but mostly just chemical goo that’s been fermented a bit, perhaps. Not bad, but the electric pink color is off-putting. B

Jones Soda Chocolate Coins: Actually tastes better than those waxy, low-grade chocolate coins you get. Not bad, a lot like a pumped-up (and strong) chocolate soda or a carbonated Yoo-Hoo. Not that I want to finish off the bottle, mind you. B+

So there you have it. Chanukah edges out Christmas by a narrow margin, though both have their ups and downs. What the hell, I heartily recommend you give them both a try. Save the Latke and Ham sodas for whatever adult parlor games you have planned for after everyone’s done with dinner.