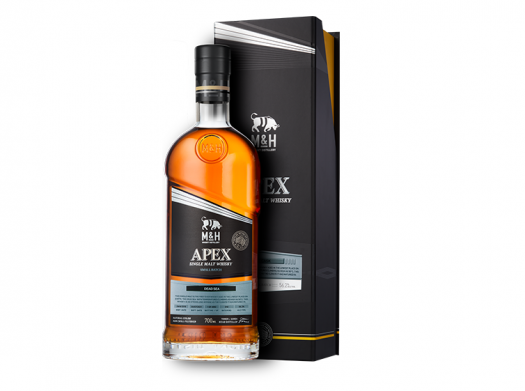 Israel’s M&H (“Milk & Honey”) has been hard at work innovating with its unique single malts, laying down all manner of unusual single barrels that one rarely sees from the mainstream, much less out of a whisky rarity like Israel. Recently we received a collection of these bottlings, including three single barrel offerings and one release of the brand’s top-end Apex series release.

The common theme here is location: Three of these whiskies were aged at the Dead Sea, the lowest place on earth and one of the hottest, which allows for some extreme aging conditions to take place. (M&H says these whiskies, which are only a few years old, lost 25% of their volume during their time in cask.)

The only non-Dead Sea whisky here is a clone of one of the single casks in the mix. It was aged in more temperate conditions in Tel Aviv, making for one of the most instructive examples of the influence of maturation location that I’ve ever encountered.

Full details for each of the whiskies tasted follow along with our notes and thoughts. Let’s dig in.

M&H Single Cask Ex-Rye Cask 33 Months Old Cask #2018-1008 – Matured in Tel Aviv. Bright and sunny — starting with the golden hue — this whisky presents a nose of fresh lemon peel and restrained barrel char, touched lightly with mint and some camphor. Gently smoky as it develops in glass, it’s powerfully aromatic but wholly approachable, a rare combination. The palate keeps the theme going, a rounded slug of butterscotch candy with notes of orange peel, baking spices, and — yes — honey. Plenty of heat on the toasty finish thanks to the 55% abv, but never off-putting. Easygoing, but one of my favorite expressions from M&H to date. 110 proof. A- / $100

M&H Single Cask Ex-Rye Cask 33 Months Old Cask #2018-1015 – Matured at the Dead Sea. Clearly darker in color, with a much fruitier character on the nose — stewed prunes and mulling spices dominate the rich, and slightly underdeveloped aroma. Heavy and gummy, the whisky shows a much more significant barrel influence, weighted down with notes of cooked figs and some Port wine. The finish is overwhelming with wood elements, ultimately clashing with the big, chewed-up fruit bomb. As different as can be from the Tel Aviv cask. 110 proof. B / $100

M&H Single Cask STR Cask Cask #2018-0820 – Matured at the Dead Sea in a stripped and recharred cask; no age info on the sample but it’s safe to assume it’s about the same as the above. Ruddy orange in color, the whisky is lightly woody on the nose, with ample fruit that runs to apricots and peaches. The fruitier elements quickly come to dominate the palate, layering silky stone fruit and some light brown sugar notes with an element of floral character that develops later in the game — hibiscus and a touch of lilac. Some toasty barrel char makes a reprise appearance on the finish, but it’s understated. Powerful but never perfumy, the whisky blends both of the above styles into a lovely, cohesive whole that works far better than it does in the ex-rye cask aged in the same location. 110 proof. A- / $100

M&H Apex Dead Sea – The Apex series is a line of rare and semi-experimental releases, this offering born (naturally) from aging at the Dead Sea. The spirit carries no other production information, except that it is aged in a variety of cask types all stored in this ultra-hot region. The results are solid, reminiscent of the above STR Cask expression. Lots of wood and fruit on the nose, a bit better balanced than the STR edition with the fruit taking on a more sultry, nuanced aroma that makes room for spices and some pepper amidst the base of apricots and orange peel. The palate fires off elements of banana, peaches, and more of that apricot character, all strong and lively. Much less floral than the STR, there’s still a touch of hibiscus here but it’s drowned out by red berries and a touch of chocolate. Beautiful but racy, and hard to put down. 112.4 proof. A / $120 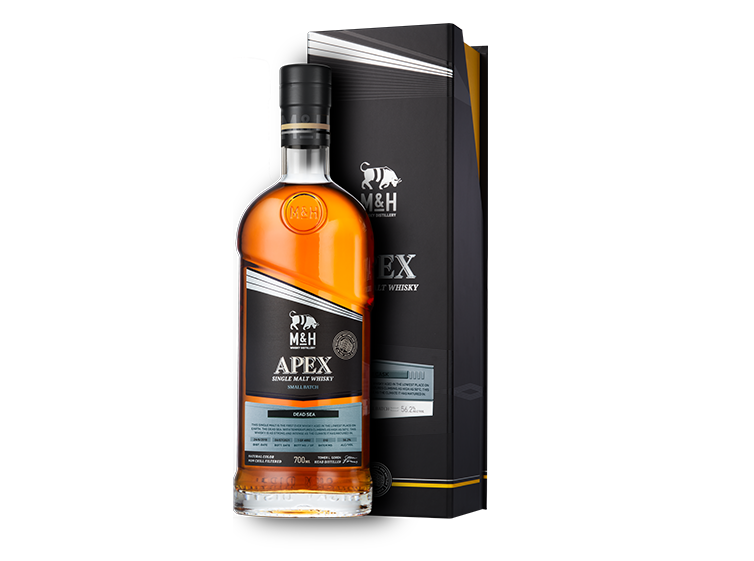