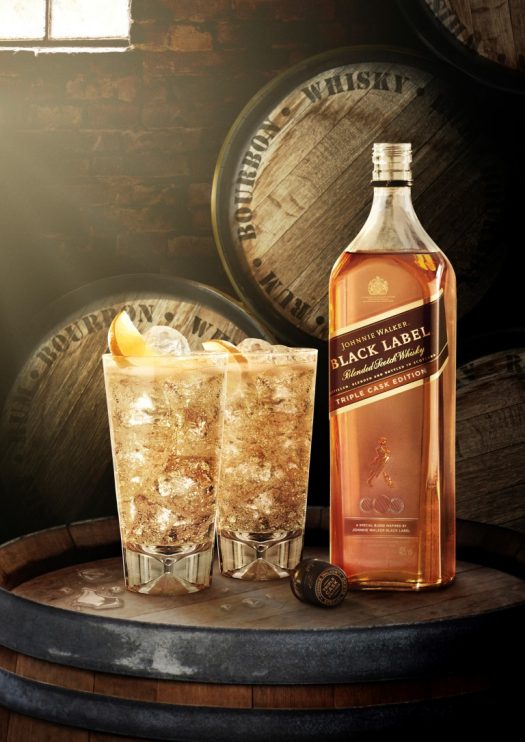 First there was Black Label, then there was Double Black, now there’s one louder: Johnnie Walker Black Label Triple Cask Edition (at least if you have access to travel retail).

Enthusiastic about the launch, Roger Jackson, Commercial Director Europe & Middle East of Diageo Global Travel said: “We’re delighted to release Johnnie Walker Black Label Triple Cask Edition as part of an exclusive partnership with Dufry stores. Shoppers are set to be inspired and excited by the instore tasting opportunities and knowledgeable staff who will explore the creation of this brilliant new blend with whisky fans.”

The development of this rich, sweet and spicy Scotch has been led by Johnnie Walker Master Blender, Jim Beveridge, and expert blender, Chris Clark. This new expression has been crafted using a blend of malt and grain whiskies from distilleries such as Cardhu and Cameronbridge and has been finished in casks previously used to mature American bourbon, then Scotch whisky, and finally Caribbean pot still rum.

The key to all of that is in the final sentence: Three cask finishes are used, bourbon, refill Scotch(!), and pot still rum. This is the first time I’ve ever heard of a used Scotch whisky barrel being described as a finishing barrel, but Walker does as Walker wants, I suppose.

It wasn’t easy to land a sample (since this is only available in a small selection of duty free shops), but we finally got our hands on a bottle. Let’s give Triple Cask a try.

The nose is intriguing yet wanders a bit far afield for Walker — largely having to do with that pot still rum barrel influence, in my estimation. Sweet and lightly bready, it’s heavy with notes of overripe fruit and laced with only a touch of smoke. The palate is rather malty (though the official flavor profile wheel wildly claims there’s no malt influence whatsoever), with that heavy fruit influence — think applesauce and baked pears — pushing its agenda hard.

There’s almost too much of it, really, to the point where things get a little gummy as the finish arrives. Notes of coconut and pineapple linger on said finish (again that rum showing its cards), with hints of baking spice evident. In the end, the enduring sweetness of the whisky ultimately overwhelms everything, stealing too much of the show from the whisky’s other more savory elements. While Triple Cask is “inspired by the lighter flavours and aromas” of Johnnie Walker, this might be a bit too much of a good thing (in the absence of all the other good stuff that whisky has to offer).