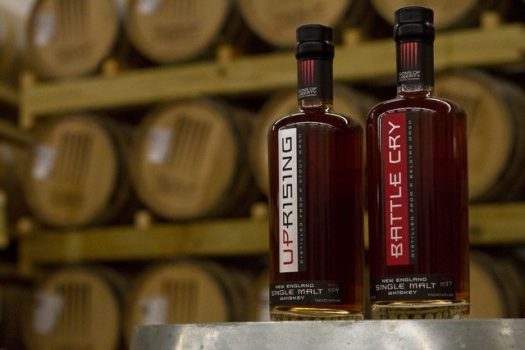 We’ve covered a number of products from Sons of Liberty Beer & Spirits Company, located in South Kingstown, Rhode Island, a company that’s best known for seasonal whiskeys like its annually released pumpkin spice-flavored whiskey. The company also runs a small brewery (though the beers are not widely available), and lately it’s been turning those beers into whiskey, too.

Today we look at two of SoL’s single malts, Uprising (distilled from a stout beer) and Battle Cry (distilled from a Belgian tripel ale). Originally released at 80 proof, the whiskeys have been revamped a bit and are now being bottled at a bolder 92 proof. We never saw these whiskeys in their original form, but we’re not letting that stop us from writing about them. In fact, with the samples it sent out, Sons of Liberty took the unique step of also sending the beers from which the whiskeys were made, so the original and the finished product could be tasted side by side. Let’s give both duets a try.

Sons of Liberty Uprising Single Malt Whiskey  – Distilled from a stout ale, 8% abv. The stout is solid, loaded with the traditional flavors of the style — nutty, some coffee notes, slightly winey. It makes for a solid base for a whiskey, which turns out quite soulful despite an aging regimen in new, charred oak barrels of just 16 months or so. A boldly malty attack leads to aromas of black pepper, heavily roasted nuts, and oily furniture polish. On the palate, youth and wood initially dominate, but this is eventually displaced by a deeper, heavier note of clove, bitter amaro, and savory herbs. The connection to the beer isn’t always evident, but when it does pop into focus, it’s surprisingly lush and beautiful. The whiskey also stands well on its own. B+ / $48 [BUY IT NOW FROM DRIZLY]

Sons of Liberty Battle Cry Single Malt Whiskey – Distilled from a Belgian tripel, also at 8% abv. The beer is extremely fruity, a touch sour at times, with notes of pears, apple pie spice, and Starburst candy on the back end. It’s not a beer that I’m in love with, but that fruit does a nice trick with the distilled rendition, giving it a lot of life. Alcohol is more readily apparent on the nose here, and it dulls the aromas a bit, which run toward dried fruits, caramel corn, and a sherry character. The palate is more traditionally “American single malt” than Uprising, the burly wood making a strong showing, but it is tempered, quite impressively, by all that fruit. Here it showcases apples, some cinnamon, and a brown sugar sweetness that pours on the apple pie notes. Chewy, with nutty, slightly Madeirized notes on the finish, the whiskey grows on you over time as the more raw, wood-heavy characteristics fade a bit. That said, I can’t help but feel like this one might benefit even more from another year in cask. B / $40 [BUY IT NOW FROM DRIZLY] 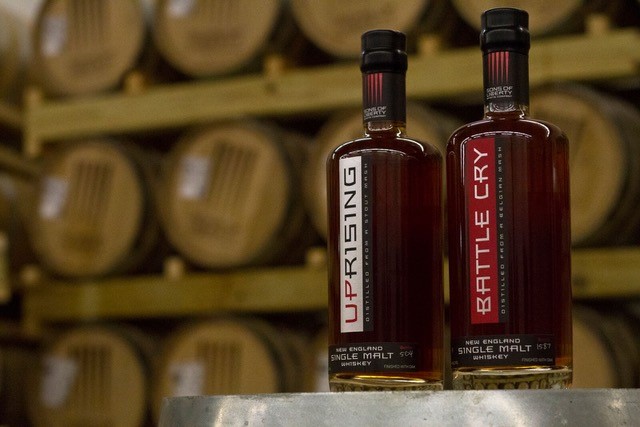