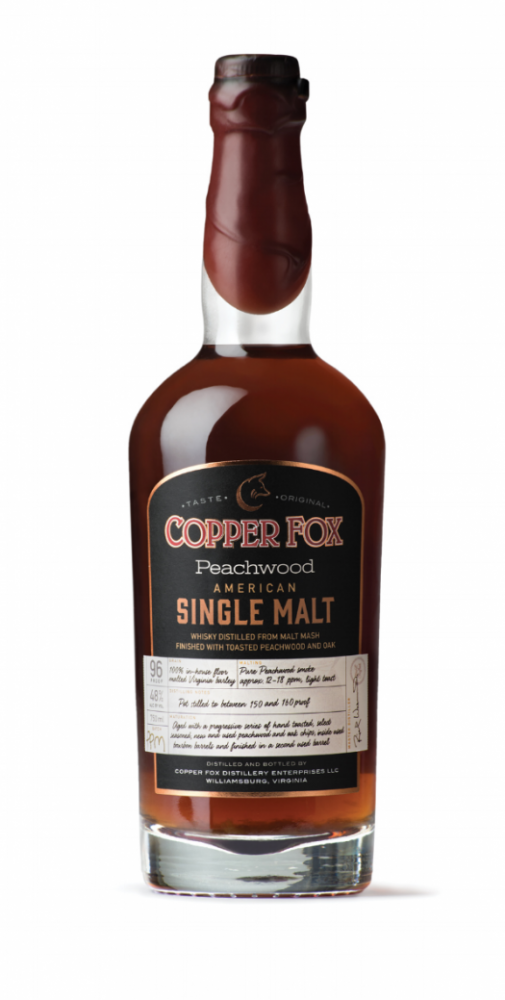 Many craft distillers today are producing good (if young) whiskey. Unfortunately, too many are bringing nothing that’s really new to the market and asking a hefty premium over quality bottles from the bigger distilleries. It’s perhaps the biggest challenge of America’s craft whiskey movement: to create not just good whiskey but good whiskey that’s also unique.

Creativity is something not lacking at Copper Fox Distillery in Sperryville, Virginia. As an early East Coast pioneer of American single malt, its founder, Rick Wasmund, took lessons from Scottish tradition (they’re the first distillery in North America to install a malt floor and kiln) and combined them with completely original techniques like the use of different fruitwood smoke in their malt. The latest addition to their line-up, Peachwood American Single Malt, is perhaps their most unique endeavor to date, relying on peachwood as both a smoking medium during kiln drying and as a maturing catalyst inside the barrels. Surprisingly, much of the process behind the single malt is spelled out on the label, from the type of still used to the barrel entry proof to the ppm (parts per million) of Virginia peachwood smoke used in the malting. It’s clearly something different, but how does it taste?

On the nose, Peachwood American Single Malt is like a candied campfire. It’s sweet with a blend of toasted grain, ripe peach, and mesquite aromas. On the palate, the whisky showcases a great balance of sweet and savory with vanilla, clove, and citrus complemented by toasted oak, a briny smokiness, and gentle heat. The peachwood is less of a factor on the palate than on the nose, which is probably for the best, but it seems to have created some welcome, honeyed citrus notes not found in the distillery’s standard single malt offering. The finish is slightly drying, but still manages to carry those complex initial flavors for a decent length until they erode into smoke and caramel sweetness. It’s a well-made and extremely interesting single malt — and it’s just what the craft whiskey world could use a little more of.