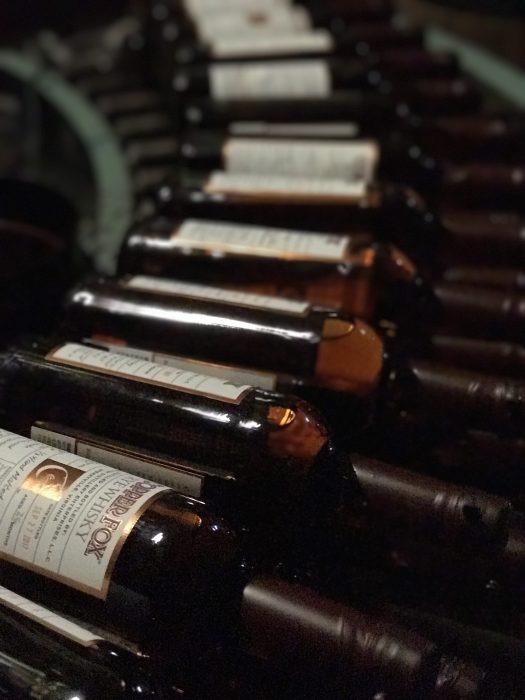 While only an hour and a half outside of Washington, D.C., Copper Fox Distillery in Sperryville, Virginia seems worlds away from any city. Many new distilleries today are taking up shop in suburban business parks or urban warehouse spaces, which makes this location, in an old 1930s apple warehouse and cider mill at the foot of the Blue Ridge Mountains, all the more unique. Rick Wasmund, the founder of Copper Fox, likes to point out that his distillery is still in the apple juice business, using applewood (along with cherrywood and, more recently, peachwood) to smoke the malted barley that goes into their whisky. 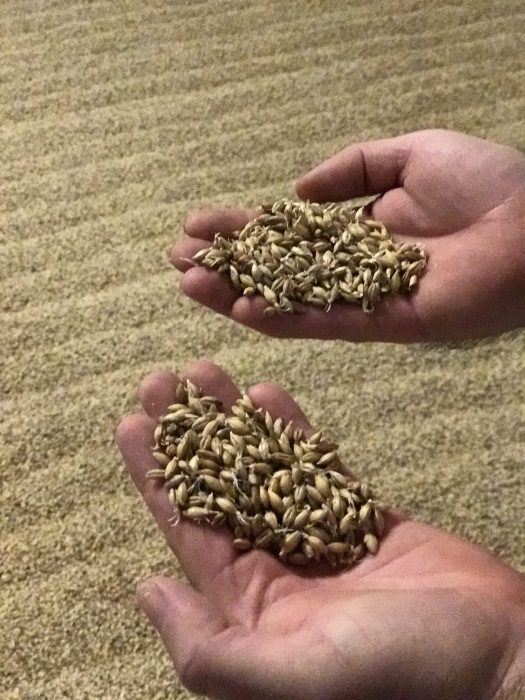 You’ll notice that’s whisky with a “y” only. Virginia is most definitely not in Scotland, but Rick learned the art of whisky-making on Islay studying under the legendary Jim McEwan at Bowmore Distillery. Copper Fox was also the first distillery in North America to install a malt floor and kiln since Prohibition, so if any American distiller has earned the right to drop the “e,” it’s probably Rick. It was his desire to understand the potential for fruitwood-smoked malt (vs. more traditional peat) that took Rick to Scotland. After returning stateside in 2000, Rick searched for the perfect location, recruited investors, and opened Copper Fox in 2005 (with only his mother and another partner) and set to work perfecting the malting process that has made him famous in the craft distilling and brewing community.

Our tour began in the malt house, where Copper Fox uses traditional floor maltings to germinate their grain, all of which is sourced from farms across Virginia. Next was a peak inside the malt kiln, an unassuming space behind a large chalkboard door that bears a list of nearly three dozen breweries from around the country brewing with Copper Fox malt. Inside, an old pot-bellied stove and Weber charcoal grill are used to dry and flavor batches of malted barley resting on the perforated floor above. Copper Fox uses a unique system of pot stills: one large pot still, a secondhand Vendome, feeds a smaller custom-designed all copper pot still with a curiously wide and squat reflux chamber. The tour ends with a look inside the barrelhouse, where all of Copper Fox’s whisky is aged in used cooperage, typically for under two years, with toasted fruitwood added — although how much and how often remain trade secrets. In keeping with the refreshingly quirky aesthetic of the distillery, a large painting of two cherubs hangs high on a wall in the barrelhouse, a nod to the angel’s share of spirit lost to evaporation.

After my informative and entertaining tour, I had my pick of drinking options and settings. In addition to their traditional tasting bar, Copper Fox just recently opened an on-site cocktail bar that has a riverside patio with great mountain views. While many distilleries have started offering cocktails, Copper Fox is raising the bar with homemade shrubs and even a line of custom bitters that will soon be for sale.

I saddled up to the tasting bar and sampled Copper Fox’s core range, as well as a couple of limited edition offerings only available at the distillery gift shop. Thoughts follow. 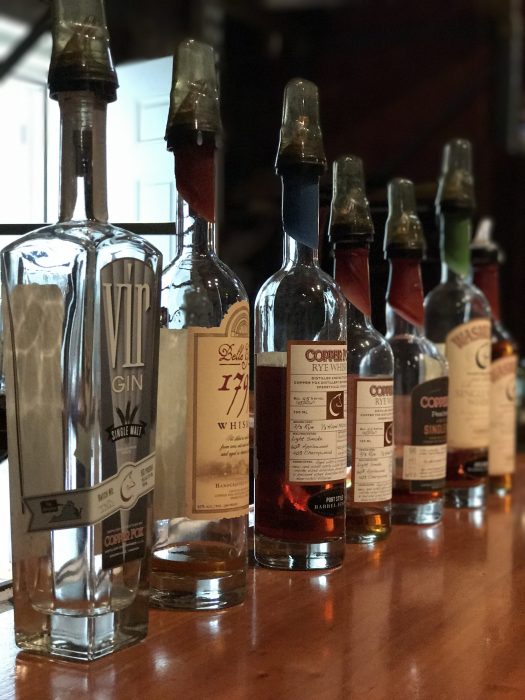 Wasmund’s Single Malt Whisky – The flagship 100% malt product. This single malt really showcases the applewood and cherrywood smoke. It’s cereal-forward and earthy, typical of a younger single malt, but plentiful fruit notes round the edges nicely and give it a surprising balance. 96 proof.

Wasmund’s Single Malt Whisky (“Green Top”) – This is a distillery exclusive release of the standard single malt extra aged in an apple brandy barrel. The brandy really compliments the applewood smoke in the malt and sweetens the overall experience with spearmint and honey notes. 96 proof.

Copper Fox Rye Whisky – While the mashbill is a robust two-thirds rye, the one-third malted barley still contributes a lot to the flavor. There are great pepper and cinnamon notes on the palate, but the lingering fruit quality and subtle smokiness make this a truly unique rye. 90 proof.

Vir Gin – The only product in the current line-up that is not a whisky, this is nevertheless a single malt gin made from 100% malted barley with a special emphasis on anise hyssop. Other botanicals used in production include Mediterranean juniper and citrus, as well as seasonal offerings from the distillery’s garden, making each batch unique. My sample was full of licorice on the nose and palate with a rich, malty body and peppery finish. 90 proof.