Seattle-based Westland Distillery makes only American single malt whiskey, but they have produced a range of variations on this theme to date including Sherry Wood and Peated, as well as more creative offerings like Garryana, part of the Native Oak series in which they age their single malt in oak sourced from the Pacific Northwest. In the winter of 2016 they added another addition to their range with the inaugural Winter Release. Westland has a rather romantic way of describing this whiskey, so I’ll let them do the explaining:

This inaugural release of Westland Winter celebrates the stark contrasts of the season. At once brisk and cozy, austere and comforting, it hovers over the threshold of the season’s two theaters, the hinterland and the hearth. Nine casks were married for this release. Smoke is the one constant, its waft on the wind carrying us in and out of each scene. The ex-bourbon casks shape the whiskey into a fully realized portrait of winter, but this release’s ascendant feature is a single ex-Oloroso hogshead of peated spirit. This sherry cask, with its immense richness and assertive peatiness, reminds us that this time of year togetherness is warming and indulgence is forgiven.

That’s a lot to pack into a bottle, but I can easily see what they are getting at. On the nose, Winter Release shows a subtle smokiness, but it’s sweet, almost like pipe tobacco or a dying campfire. There’s ginger there, too, golden raisin, and a little candy apple. The palate is oily and honeyed with cinnamon and dark fruit notes that become chocolate covered on a lingering and slightly spicy finish. I get the “winter in a glass” thing, but more importantly, this is a dram I would pick over a lot of other more traditional single malts out there. Here’s looking forward to next winter! 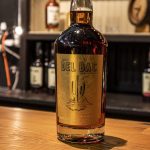