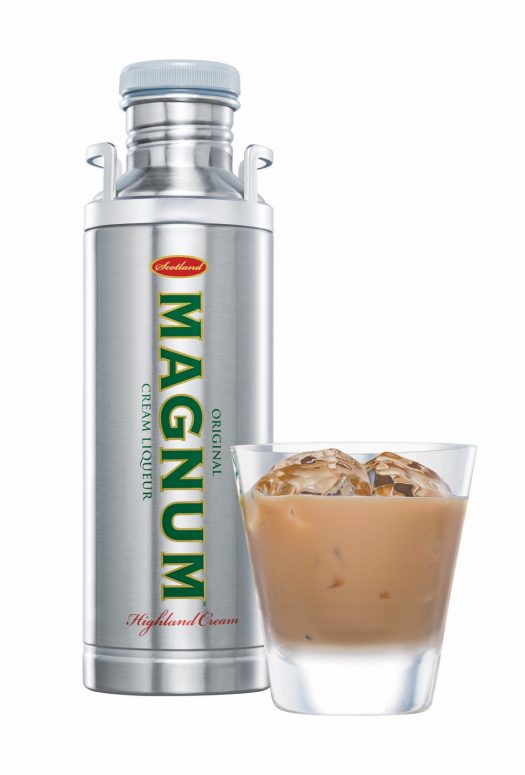 Turns out Ireland doesn’t have to have a lock on the whiskey cream industry. Introducing Magnum Highland Cream Liqueur, which is made from Speyside Scotch whiskey plus cream sourced from Holland and bottled in what is easily a lock for the best packaging of the year.

We tasted it. But first, how about a little production information:

To create this lively and premium release of Magnum, Scotch malt whisky that has been aged three years in American Oak casks in Scotland is blended with the rich, signature cream from cows that range and graze freely in farmer-owned dairy farms in Holland. The result is an elevation of cream liqueur creating, an entirely new dimension to the category.

Magnum is packaged in a 100% recyclable and reusable stainless steel canister reminiscent of a milk can.

This is a fairly traditional whiskey cream, though the switcheroo of Scotch for the usual Irish whiskey is noticeable. The nose is more butterscotch than the honey notes you typically see in Irish, filtered through a touch of nutmeg and a bit of citrus.

There’s an immediate lick of lemon and orange peel on the tongue, before the expected butterscotch, milk chocolate, vanilla, and toffee notes overtake the palate. The body is silky and creamy but not overwhelming, and unlike many cream liqueurs, it has a lasting finish that echoes not chocolate syrup but rather that citrus character, lingering on the back of the palate the way it might with a simpler Speyside malt.

It really does hang in there for the long haul. I find the only way to get rid of it is to switch to another drink or, of course, take a fresh sip of Magnum. Slightly off the beaten path but still well within the boundaries of a traditional whiskey cream, it’s definitely worth a shot for those who’ve grown tired of Baileys.