Like Flaviar and the Whisky Explorers Club, MashBox aims to expose you to spirits you wouldn’t normally get to try. The main difference with this booze-of-the-month club is that with MashBox you get a lot more than just whiskey (as we’ll see below). It’s a veritable tour of the entire spirits universe.

The deal is simple: $99 a year gets your four boxes of three 50ml samples, which works out to about $8 per dram. That’s about what a shot of Jack will cost you around these parts, so it’s not a bad deal.

MashBox’s focus is squarely on craft and unusual spirits (with a heavy focus on New York-based operations) — and some of the products included in the sample kits I’ve received I’m never encountered in the wild, or even heard of before this. There’s no need to scour the web for data, though. Each shipment comes with a set of cards offering some basic production information and tasting notes on each product you receive. And if you like something, you can buy a full bottle at a discounted price.

Here’s a look at nine of the samples from three recent MashBox shipments. These mini-reviews are in no particular order as the products of the various sample boxes we received got mixed up, but they should give you an idea of what to expect each quarter. While not every product is a home run, I’m a big fan of trying something off the beaten path once in a while. Give MashBox a try and see what you think!

Kings County Distillery Bourbon – Young bourbon from Brooklyn, NY. Heavily grainy, with chocolate malt overtones and tons of wood. It’s initially undercooked, as craft whiskey can often be, with a surplus of ginger and baking spice on the back end to help temper the heavy barrel influence. 90 proof. C

Barrell Whiskey Batch 2 – We’ve covered Barrell a few times, but batch 2 of its sherry-cask treated whiskey is a new one for us. Interesting butterscotch notes and red berries meld well with caramel and vanilla notes. A bit astringent, but that happens at 123.8 proof. B

Van Brunt Stillhouse Rye Whiskey – Van Brunt’s 9 month old rye is youthful and brash (see other Van Brunt reviews here), but its pungent nose finds a curious companion in a body that offers up notes of cloves, petrol, burnt bread, and a bit of burnt rubber, too. Intriguing, but extremely young. 84 proof. C+

Oak & Rye Wormwood – Grain-distilled spirit (corn- and rye-based whiskey) flavored with wormwood. In other words, it’s a unique spin on absinthe by way of a flavored whiskey. The nose is so hard to place — forest fires, rubber, and scorched herbs — but the palate is gentler, with a smoky sweetness that finds a strange complement in the form of lingering anise notes. One of the more bizarre spirits I’ve seen lately. 90 proof. B-

Maid of the Meadow – Vodka with herbs and honey from Denning’s Point Distillery in Beacon, New York. Quite good, and it delivers on exactly what the description promises. The honey is restrained and gentle, the herbs a dusting of cinnamon, sesame, and lemon. Tastes like it’s made for a toddy. 80 proof. A-

Glorious Gin – Breukelen Distilling offers this heavily floral gin, which includes rosemary, ginger, and grapefruit in the mix. It tops a somewhat earth-toned core with a good amount of fruit character and only a modest juniper slug. Interesting stuff and unexpected from the normally bombastic craft gin market. Try with a craft tonic. 90 proof. B+

Kas Krupnikas – A traditional Lithuanian honey spiced liqueur made in Mahopac, New York. Richer and much more honey-focused than Maid of the Meadow, but just as compelling in its own, special way. While Maid of the Meadow feels like an ingredient, Kas Krupnikas is a soothing sipper that works beautifully on its own. Very heavy honey — equal parts fruit and earth — dominates, with some hints of orange peel, cloves, and fresh gingerbread. A beautiful little surprise. 92 proof. A

Doc Herson’s Natural Spirits Green Absinthe – A South African madman makes absinthe in Brooklyn, people. What he’s come up with is a classic rendition of the spirit, with a sweet licorice and fennel focus that comes alive with sugar and water. It doesn’t need much doctoring, mind you, just a little kick to bring out its inner beauty. Lovely mint and cocoa powder notes emerge on the finish. 134 proof. B+ 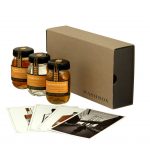