The good folks at Ireland’s Powers don’t know when to quit. First they rebrand and relabel their classic Gold Label Irish whiskey in 2009, now they’re back at it again, redoing the bottle a second time while boosting the proof a bit. (And that doesn’t even include the launch of the masterful John’s Lane special edition bottling.)

Nothing has changed about the recipe to Gold Label — it’s still triple distilled at Midleton, aged in ex-bourbon barrels, and non-chill filtered. The only change (aside from bottle cosmetics that now include a metallic neck hanger) is the increase in alcohol up to 43.2% — the product’s original export strength — from the standard 40%.

The change is a good one, giving a little more power (ahem) to the whiskey while maintaining the easy charm and gentle flavor profile that attracts so many people to Irish whiskey.

There’s lots of traditional Irish character here to explore, with a nose that’s full of ripe banana, butterscotch, cereal, and gentle honey notes. On the body, all of the above are met by orange notes, along with both coconut and pineapple on the back end. The finish is both fruity and malty, reminiscent of a frozen custard spiked with toppings. The slight bump in alcohol works well at boosting the body just a smidge, adding just a bit more creaminess to an already well-balanced spirit. 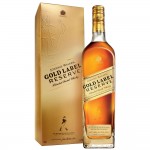