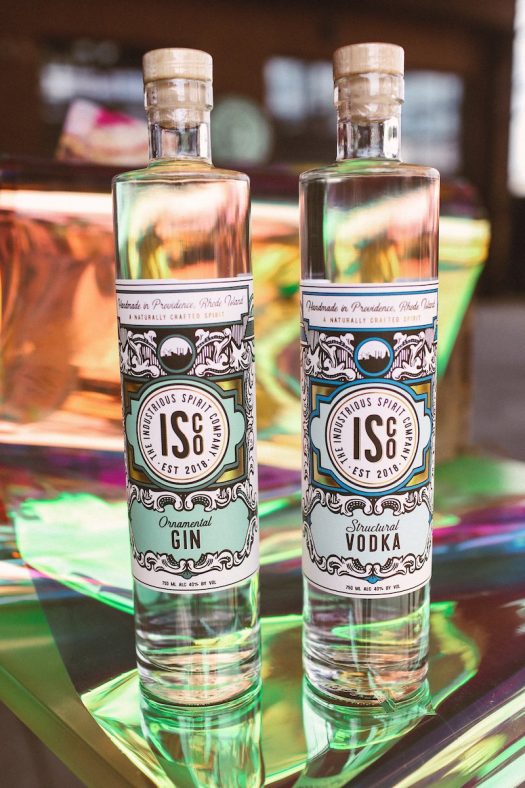 New England travelers have long known Providence — Rhode Island’s capital and economic center — as an underrated gem. It’s famous for a thriving arts community, diverse food scene (with an emphasis on seafood), and proximity to coastal havens like Newport. And while the city’s bars and restaurants have drawn crowds for decades, the distilling scene is composed of recent upstarts.

Chief among them is The Industrious Spirits Company (ISCO, as it’s locally known). Providence’s first post-Prohibition distillery, ISCO was first conceptualized in 2016, officially founded in 2018, and began distilling in early 2020. The distillery is situated along the Woonasquatucket River just a mile from downtown Providence; the site and main building have a century-long history of producing structural and ornamental steel within the city’s “Industrial Corridor.”

Though the Covid-19 pandemic delayed public distillery tours for over a year, ISCO’s team adapted by building an outdoor tasting patio that includes a bespoke cocktail menu, live music, and local food trucks. While distillery tours officially opened to the public in June 2021, ISCO was generous enough to offer me an early preview of the tour and their facilities in May.

Reclaiming Traditions and Building New Ones

The ISCO team includes Manya Rubinstein, co-owner and co-founder with a lengthy background in marketing and publishing. Rubinstein and head distiller/creative director Dan Neff first developed the idea of bringing craft distilling back to Providence back in 2016, having known each other for decades as part of Providence’s art scene. In the following years, they added CFO/COO Doug Randall, a former classmate of Rubinstein’s, and John Curtin, founder of Albany Distilling Company (est. 2011). Eric Olson, a lifelong Rhode Islander, now serves as the facility’s assistant distiller. 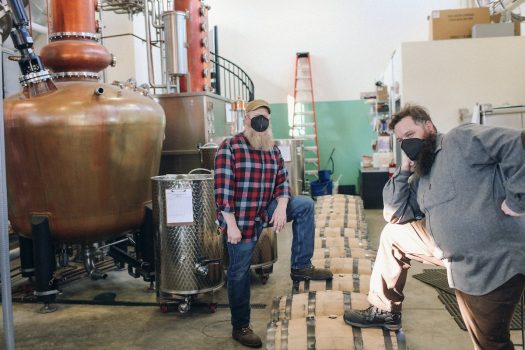 By building a new distillery in one of New England’s industrial and cultural hubs, ISCO’s founders hoped to jumpstart a local distilling tradition that lay dormant for nearly 100 years. ISCO’s location is deep within one of Providence’s long-established artistic neighborhoods, and the distillery’s focus is making craft spirits a part of that creative community.

“Our goal is to preserve and honor tradition while also bringing an artistic, out of the box approach to flavors and ideas,” says Neff, who believes Prohibition resulted in a massive cultural loss throughout the United States.

ISCO leveraged local talent to build up both the brand’s imagery and the distillery’s physical features. ISCO’s bottle labels were created by a local designer. The tasting room’s wall decorations and custom steel bar were built by Providence-based artisans. The distillery itself is surrounded by local artist studios, galleries, and artisanal food producers.

ISCO is also focused on a commitment to sustainability and emphasizes their use of regionally grown, organic corn as the base of the distillery’s vodka and gin lineup. (ISCO’s Blue Velvet Bourbon utilizes blue corn from Kentucky and Mexico.)

On our preview tour, Rubinstein lamented that while they originally hoped to source the distillery’s grain from in-state producers, Rhode Island’s tiny size proved to be a big obstacle; there simply isn’t enough farmland in the state for producers to grow corn at significant scale. 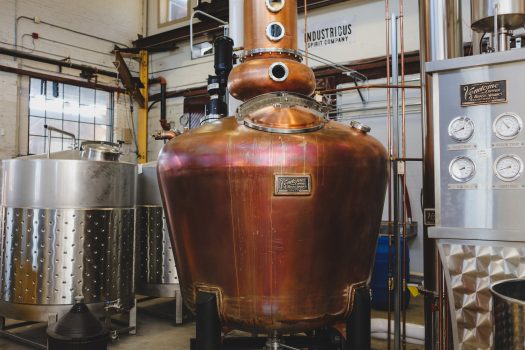 ISCO currently distills three spirits on site. Their vodka and gin are named after the steel that used to be produced in the facility, which was a local producer of metal for both “structural” and “ornamental” purposes.

ISCO Structural Vodka – A 100% organic, non-GMO corn base that’s batched and charcoal filtered 20 times (or more). On my first tasting, I found the spirit to be surprisingly creamy on the palette, with just the tiniest lingering hint of the grain.

ISCO Ornamental Gin – Currently ISCO’s hallmark spirit, their gin uses a proprietary mix of 15 botanicals in addition to juniper. While Rubinstein wouldn’t divulge the full blend, she did say elderflower, passion flower, citrus, and hops are primary ingredients. I found the gin to be among the most complex I’ve tried in recent memory. Sipped straight, the flavor profile was very rich — perhaps too rich for some, but robust in a cocktail — with sweetness that reminded me of several barrel-aged gins I’ve tried in the past.

ISCO Blue Velvet Bourbon – ISCO’s 100-proof bourbon is lightly aged and has only been released in limited quantities so far. It’s distilled from two blue corn varieties and aged in a warehouse just off-site. Distillers Neff and Olson are currently experimenting with longer aging times and different barrel sizes.

Visitors to the distillery will pass through three main areas: the distillery floor, ISCO’s tasting room, and the facility’s outdoor patio, which is supported by the steel mill’s original girders.

The distillery itself is dominated by a Vendome copper pot still. (Rubinstein affectionately calls it “Baby,” noting the 9-month transit time from Louisville to Providence.) It’s a tiny operation by modern distilling standards. Master distiller Neff and assistant distiller Olson do much of the technical work — including separating out a distilling run’s heads and tails — by hand and taste as compared to more automated practices that are commonplace nowadays. 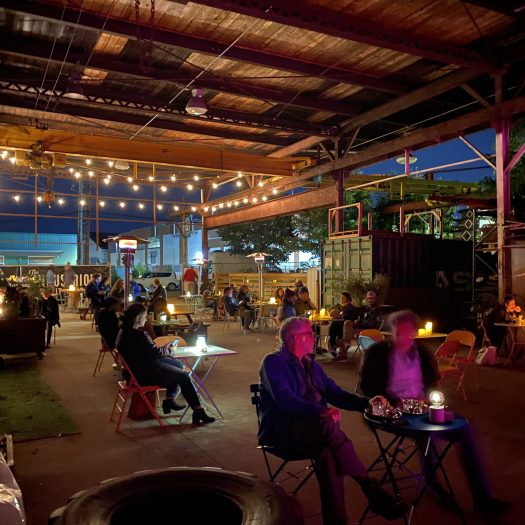 Visitors can enjoy cocktails, curated snacks, or neat drinks in the brand new tasting room with a window looking directly onto the distillery floor. Weather permitting, visitors can also take their drinks out to the patio. On certain event nights, the covered patio turns into a lively outdoor venue complete with local musicians, DJs, and a rotating variety of food trucks.

For visitors looking to make a to-go purchase at the distillery, beware that Rhode Island state law limits customers to one 750ml bottle of spirit per customer, per day. ISCO bottles in a much less limited quantity are available for purchase at most liquor stores in and around Providence. 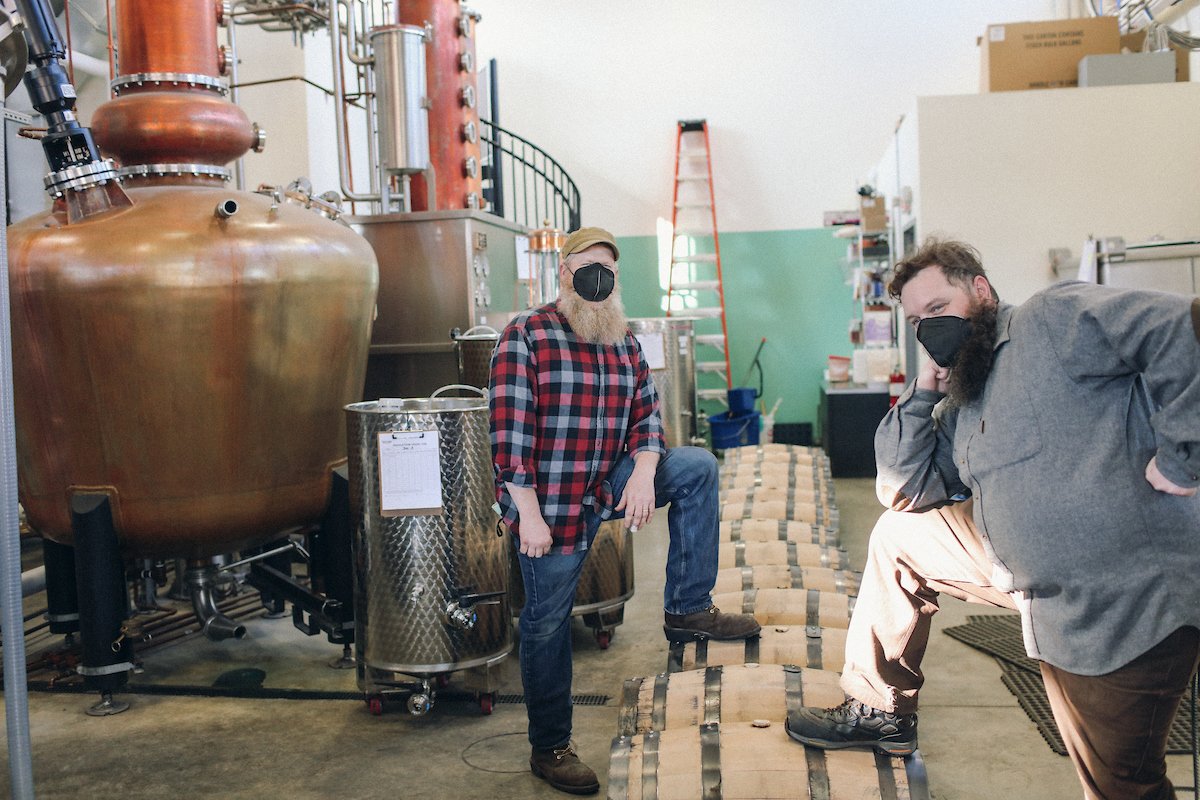