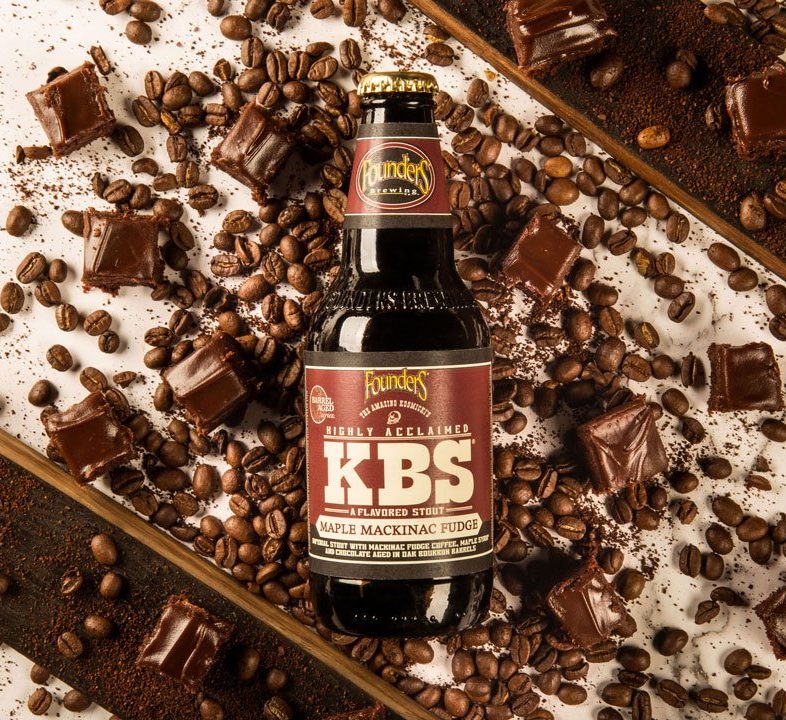 It’s getting harder and harder to keep up with all of the different barrel-aged beers out there, and lately, it seems, some of them are just getting downright ridiculous. For a good example of what I’m talking about, look no further than Founders’ newest spin on their venerable Kentucky Breakfast Stout (KBS). The KBS Maple Mackinac Fudge – yes, that’s actually what they’re calling it – hit store shelves last fall. It’s an imperial stout brewed with Mackinac Fudge coffee which doesn’t actually come from Michigan’s Mackinac Island or contain any actual fudge, but it’s apparently chocolaty as hell. Then they add maple syrup, because why not. Last, but definitely not least, the stout goes into bourbon barrels and ages in Founder’s famous subterranean caves. As wacky as this one sounds, Founders hasn’t struck out yet with the KBS line. Let’s see how this one stacks up.

This beer pours like motor oil with a big, frothy, hot chocolate-tinged head. The aroma, unsurprisingly, is identical to that warm hit of confectionary indulgence you get when you walk into a fudge shop. It goes without saying that it’s sweet – really sweet, actually – but with enough creaminess, rich dark chocolate, and subtle, heavily roasted coffee bean notes to make me honestly want to swim in this thing. On the palate, it’s thick, but not nearly as heavy as some barrel-aged stouts out there. The chocolate is pretty well-balanced and not overly sweet, which is surprising from the Hershey’s factory of an aroma I first experienced. The coffee notes, fresh brewed and milky, offer a nice counterpoint, along with the maple, which also arrives with a milder sweetness a la Canadian Breakfast Stout. I was actually kind of expecting more sweetness and bigger dark chocolate flavor, especially on the finish, but it ends the way it begins, fudge-forward yet still surprisingly restrained. Another winner.