Book Review: Hennessy: A Toast to the World’s Preeminent Spirit 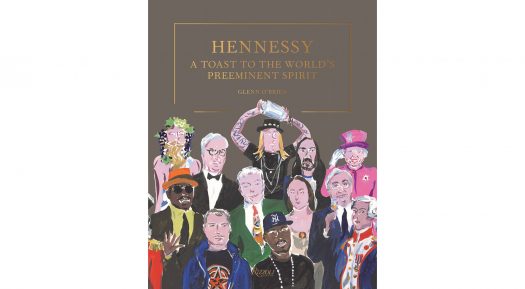 The title might cue you off that this is a project sponsored by Hennessy, a coffee table book which serves as a richly illustrated historical guide to everything there is to know about this famed Cognac.

The book is divided into sections, each built around a topic or a specific luminary that has something to do with Hennessy. This ranges from eighth generation Hennessian Maurice-Richard Hennessy to, no joke, Fab 5 Freddy.

After wrapping up some basic history, the book is heavily organized around Q&A style interviews. These Q&As could use some tightening up — there’s a lot of “Well… you know… er… um…” in the transcripts — but if you’re interested in the brandy or the people doing the talking, or the relationship between the two, they’re worth a read in the way that a quickie Esquire lunch interview can be a fun way to spend five minutes. (Writer Glenn O’Brien is best known as a veteran interviewer with a focus on music.)

An equal focus of the book is art, which ranges from original illustrations to archival photos, ad images, and other ephemera that ranges back decades. It’s just as much fun (or more) to flip through the pictures as it is to see what Nas has to say about things.

Hennessy: A Toast to the World's Preeminent Spirit