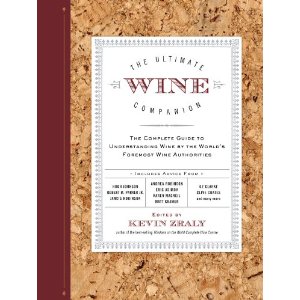 For a book purporting to be the “ultimate” wine companion, this tome is awfully slim. No judgments, really, but anything claiming “ultimate” status always makes me wonder about where a writer’s bar of excellence may lie.

Like the previously reviewed Whiskypedia, The Ultimate Wine Companion is not the work of one writer but rather a compendium of thoughts from a gaggle of experts. If you know anything about wine, the list of authors will dazzle you: Parker, Clarke, Teague, Asimov, Mondavi, Coppola, Rothschild, Lynch, Kramer… the list goes on and on. Even Jay McInerney, a novelist who’s reinventing himself in the wine world, is here. All that’s missing is Null, to be honest.

Edited by veteran wine pro Kevin Zraly, the book’s title is more telling on second glance: It is not The Ultimate Wine Encyclopdia, it is The Ultimate Wine Companion — a friendly little guide designed to pique your interest in wine and perhaps throw a fun fact or two your way. Curious how Gary Vaynerchuk got his start? An excerpt from his latest book is here. There is a bit about the famous Davis test, wherein various wine “experts” failed to identify whether wines served in black glasses were actually red or white. Should a wine be opened well before drinking it? What does one drink with duck?

It’s largely good fun, and there is plenty of wonky wine stuff here too: An in-depth discussion of the Piedmont area, Argentina, and so on. And there are essays that may offer little real value to the kind of person who might buy this book (or, more realistically, to whom this book may be given as a birthday gift). How to order wine (like, literally, how to ask a waiter to bring you wine) is as skippable as the guide to writing your own tasting notes.

The art choices in the book are a bit bizarre: Photos are almost exclusively devoted to wine labels, thrown in haphazardly whenever a specific wine is mentioned. The occasional map, of course, also appears, but the random label spam seems strange.

As is often the case with anthologies, there is good and bad here and a lot in between. The writing is often lively but is sometimes too austere for the leisurely pace that Zraly tries to set. Not a bad try, but after putting it down, I find I’m more in the mood for a cocktail than a Chardonnay.