Easy to find and almost as easy to drink, Glenmorangie’s entry-level whisky is a solid and affordable entree into the world of Scotch.

Glenmorangie is often noted for its floral character, but here you’ll find a surprising saltiness that interplays in an intriguing way with the caramel and honey notes of from the wood in which the whisky was aged, giving Glenmorangie a bit of a salt caramel tone. Floral notes are there, but they’re underneath that highland, coastal character, which boasts a fair bit of peat smoke, too.

Aged just 10 years, Glenmorangie Original isn’t overwhelmingly complex, but it offers so many different flavors — some up front, some subtle — that it’s a definite go-to Scotch whenever I see it on a drink menu. 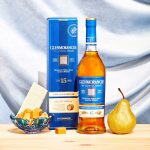