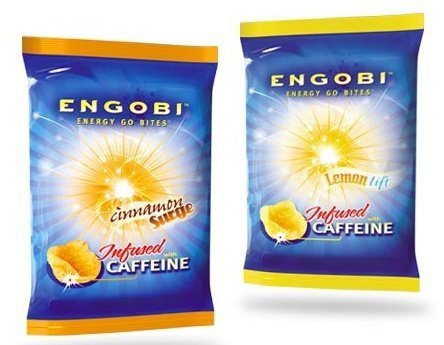 They’re putting caffeine in just about everything these days, so why not a snack chip, too? Engobi takes the energy-boosting concept into the world of chips.

Now one would not think that you could get that much caffeine in to a chip, but according to the company, a tiny, 1.5-ounce bag of Engobi chips has 70 percent more caffeine than a Red Bull or similar. Now that’s energy!

Made from corn, wheat, and rice flours, Engobi chips are puffy semi-spheres, something akin to a cross between a Muncho and a pork rind. I like the texture a lot.

The flavor is something else, though. You might be expecting traditional nacho cheese, sour cream & chive, or salt & vinegar flavor… but what you get is two alternatives: Lemon Lift and Cinnamon Surge. Both flavors are exactly what they sound like: Very sweet and designed more for a palate that can deal with overpowering sugariness. For what its worth, I found the cinnamon version far, far better (the lemon is just too tart), but I could never finish off an entire bag myself. (That’s ~66 chips!)

Then again, I think Red Bull is nasty, too.