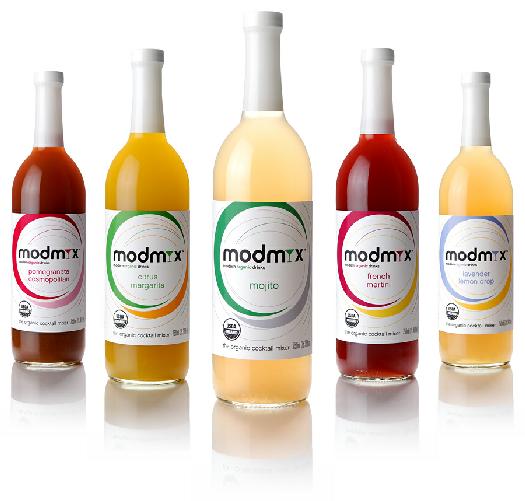 Yes, even I am sometimes too lazy to juice a lime… and sometimes pineapple juice and fresh mint is not in the house. While the idea of prepackaged mixers is a little off-putting to most mixologists, the notion of organic ones has a certain appeal. When am I going to get organic pineapple juice or lavender, after all?

Modmix produces five mixers and I’ve given them all a try. Overall I’m impressed. While they aren’t all home runs, I wouldn’t hesitate keeping one or two in the fridge in case of a cocktail emergency. Just drop in a shot of liquor and two shots of mixer (adjust proportions to taste), shake with ice, and you’re good to go with a cocktail you may not otherwise be able to pull off on short notice.

From favorite to least:

Modmix French Martini – A nice pineapple, raspberry, and lemon mix. I’d like a bit more pineapple in the blend, but this one tastes like the real thing, and way better than anything made with  canned pineapple juice. A-

Modmix Citrus Margarita – Lime and orange, can’t go wrong here. Tastes like a fresh margarita plus OJ. This one is highly dependent on the tequila you put in it, so aim high. A-

Modmix Lavender Lemon Drop – The lavender is lost in this one, but otherwise it is a very reliable, if tart, lemon drop. B+

Modmix Mojito – Mojitos don’t really work without mint leaves in the glass, no matter how good the mint syrup you use is. Modmix’s is as good as any, but the real thing is still considerably better. B

Modmix Pomegranate Cosmopolitan – Don’t ask me how but somehow this mix of pomegranate, orange, and lemon juice smells and tastes a lot like V8. It’s also a rather hideous brown color (the product shot below is a little misleading), making for an all around unpleasant experience. C-