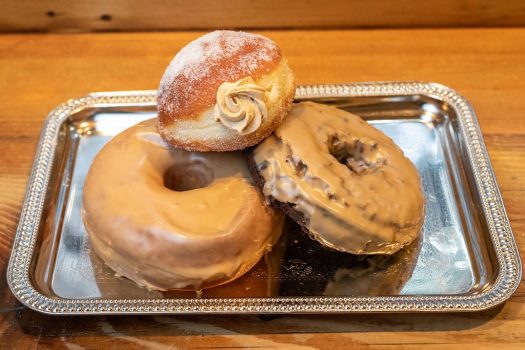 It’s Irish Coffee Day… and what goes better with Irish Coffee than a nice doughnut? Let’s take that one step further: How about an Irish whiskey-spiked doughnut, courtesy of Slane Irish Whiskey today and New York-based Dough Doughnuts?

The concept isn’t difficult. The bakery has produced a trio of doughnut styles, all infused with Slane Irish Whiskey. But here’s more back story on the offerings.

To celebrate National Irish Coffee Day on January 25, Slane Irish Whiskey announced a collaboration with renowned New York doughnut shop Dough Doughnuts. In honor of one of the biggest Irish Whiskey days of the year, the Slane and Dough teams have created three bespoke whiskey-infused doughnuts that pair perfectly with Slane Irish Coffee cocktails. Starting today, the doughnuts will be available for purchase for a limited time at all Dough locations in New York City and online at DoughxSlane.com.

The bold, rich flavor that’s a result of Slane’s signature Triple Casked maturation process inspired the doughnut flavors, and the whiskey is even incorporated throughout the dough, frosting and filling of the limited-time sweets.

Details on each of the doughnuts, along with tasting notes, follow.

The Spiked Irish Coffee Doughnut – “A traditional yeast doughnut coated in a whiskey-infused iced coffee glaze made from Slane, coffee extract and sugar. Light and sweet with flavors of brioche, this doughnut pairs well with an iced Irish coffee cocktail.” (These sadly appear to be sold out already; we didn’t get them.)

The Irish Coffee Choc-tail Doughnut – “A velvety chocolate cake doughnut double dipped in a Slane-infused coffee glaze. The rich whiskey flavor rounds out with a chocolate finish and is the perfect complement to a traditional Slane Irish Coffee cocktail.” Bold with cocoa, the chocolate notes really dominate the whiskey on this one. You do get a nice kick of the whiskey on the glaze, which has a fairly modest coffee element and a healthy slug of vanilla, but I would have loved to get more of it in the mix. A-

The Irish Coffee & Cream Filled Doughnut – “A classic yeast doughnut filled with a Swiss buttercream flavored with Slane and then rolled in orange sugar. Inspired by the original Irish coffee cocktail recipe, the sugar dusting and cream filling are reminiscent of the cream in Irish coffee. This doughnut pairs well with Slane Irish Whiskey served neat.” I loved the filling in this — very much a Baileys character — but wish there was more of it. All of mine was balled up at the top of the donut. I ended up chowing on the top half and leaving some of the lower half behind. A light cinnamon element in the dough gives the ‘nut an extra lift, but it’s hard to beat that creamy middle. B

The confections are available in shops and online. Participating Dough locations include Flatiron (14 W 19th St at 5th Ave.), City Kitchen (700 8th Ave at 44th St.), and UrbanSpace Vanderbilt (230 Park Avenue at 45th St.). The doughnuts are available for a limited time for $54 per dozen in store and $90 per dozen plus free shipping online, until they’re sold out. 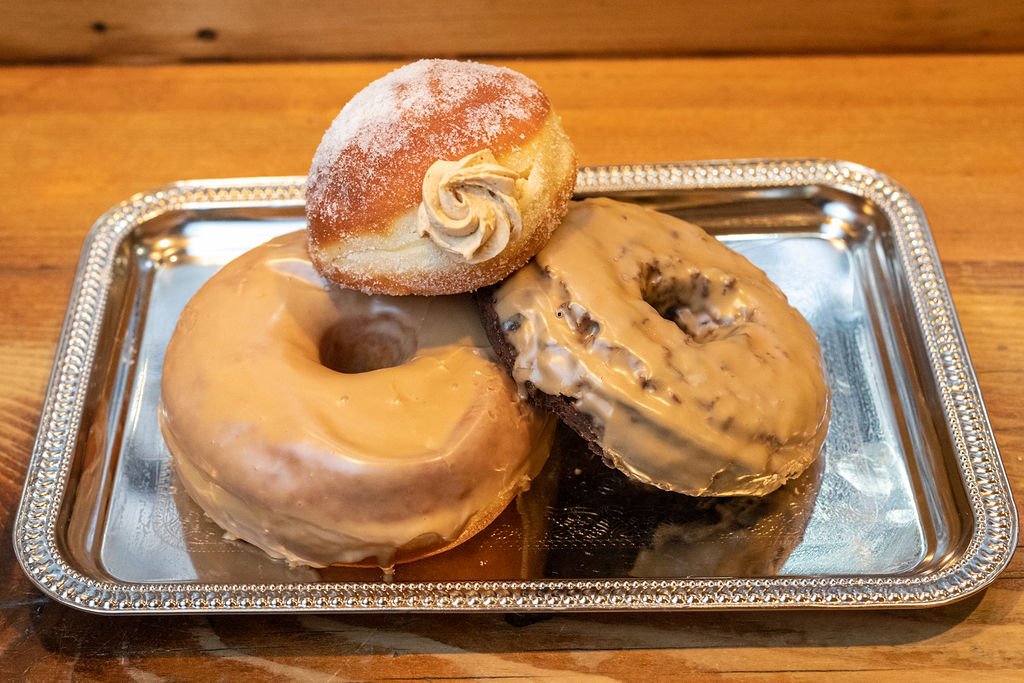