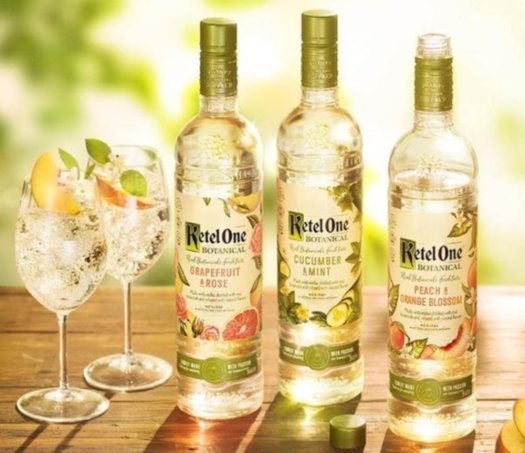 Netherlands-based Ketel One has long had a reputation for producing quality but inexpensive vodkas. Like the Dutch people, they don’t go in for hype  Ketel has been in business for over 300 years, and in that time they have only produced, in addition to their basic Ketel One brand, an orange vodka and a lemon vodka, and a couple of collectors’ editions. The label stays the same, the vodka stays the same.

So the fact that Ketel One has now introduced three new products at the same time is quite something. The three are described as botanical vodkas. In other words, like gins, they are infused with different natural fruits, herbs, and other ingredients. They are also diluted to 60 proof, the main intention being to enjoy them in long drinks. They can be tasted neat, and people who don’t like 80 proof spirits neat might enjoy them that way, but basically they’re for use with mixers.

All three have certain things in common. Each bottling has two main ingredients, and the one named first is the predominant one. The one named second is more of a hint and balance in the background, a touch of subtlety. They also have no artificial flavors, no sweeteners, no GMO grain, and zero carbs in the bottle. Each goes better with soda than with tonic, with that little bit of a fizz making more for a long, refreshing drink. If you were going to add a garnish, we suggest using the second ingredient named.

Ketel One Cucumber & Mint – The predominant cucumber taste gives this a hint of Hendrick’s Gin, and this was by far the most interesting and balanced of the three. It’s made for a pre-lunch drink on a warm summer’s day, with plenty of ice and soda, and a sprig or two of mint thrown in. The lower alcohol (and carbs) level means you can enjoy a second one guilt-free before moving on to wine or beer. B [BUY IT NOW FROM DRIZLY]

Ketel One Grapefruit & Rose – Grapefruit is the one where the main flavor ingredient really hits you both in the nose and on the palate. If you like grapefruit, you’ll love this, as it’s rich in the distinctly tart, citrus smell of a fresh grapefruit. Drinking it neat is like biting into a slice of breakfast grapefruit. The use of freshly-squeezed grapefruit juice rather than the more common grapefruit peel is why the flavor is so full-on. If the rose is there at all it’s merely in the slightest hint of floral flavors. This is one whose taste you might want to double down a little, perhaps by adding some straight Ketel One to a long drink with soda. B [BUY IT NOW FROM DRIZLY]

Ketel One Peach & Orange Blossom – Peach is the dominant note, sweet and fruity, and as with the others the orange blossom is an undertone. This was my least favorite, because there’s a touch of artificiality about it. Not that it is artificial, as these are infusions and not flavored vodkas, but the peach aroma and taste is a little candy-like. If you like candy, well, dive in. B [BUY IT NOW FROM DRIZLY]