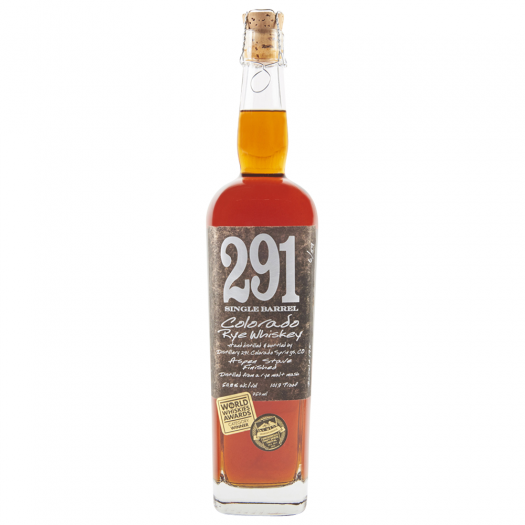 Despite being best known for its craft breweries, Colorado has seen plenty of distilleries open across the state, many of which, unsurprisingly, make at least one whiskey. Distillery 291, which began distilling in 2011, makes whiskey almost exclusively (its Citrus Clove Liqueur is the exception). Its seven distinctive whiskeys adhere to the founding vision of Distillery 291’s owner and distiller, former New York fashion photographer Michael Myers, whose stated goal is to make a spirit that reflects and embodies the Wild West in American history. We recently got the chance to taste 291’s tribute to the Cowboy era with samples of its Single Barrel Colorado Rye and Single Barrel Colorado Bourbon, both of which were aged for less than two years and finished with Aspen wood staves. Thoughts follow.

Distillery 291 Single Barrel Colorado Rye Whiskey – 291’s flagship rye is comprised of 61% malted rye and the remainder corn. The malted rye comes across immediately on the nose with a slightly medicinal, cherry candy note; almost like a cough drop but sweeter. Subtler aromas of sweet wood, toasted coconut, and maple syrup round out a nose that’s surprisingly complex for such a young whiskey. On the palate, there’s a rock candy sweetness that quickly becomes all lumberyard, no doubt helped along by the Aspen stave finish. The wood makes it initially seem one-dimensional, but the more I taste,  the more I pick out notes of clove and cinnamon stick and dark red fruit, all of which dissolves into a lengthy finish punctuated by something I can only compare to the syrup in a jar of really good cocktail cherries. One of the more unique young ryes I’ve sampled. 101.4 proof. A- / $70 [BUY IT NOW FROM CASKERS]

Distillery 291 Single Barrel High Rye Colorado Bourbon (2018) – The mashbill for 291’s Single Barrel Colorado Bourbon consists of 80% corn, 19% malted rye, and 1% malted barley. Again, the malted rye shows itself on the nose with that cherry lozenge note. It has similarities to the rye, in fact, but with more vanilla, chewy caramel, and cinnamon stick. The lumberyard also returns prominently on the palate, but unlike the rye, here it doesn’t evolve into much. There’s some ginger and baking spice buried under spicy oak and smoky campfire notes, but it’s all somewhat astringent and drying. 100 proof. B / $70 [BUY IT NOW FROM CASKERS]