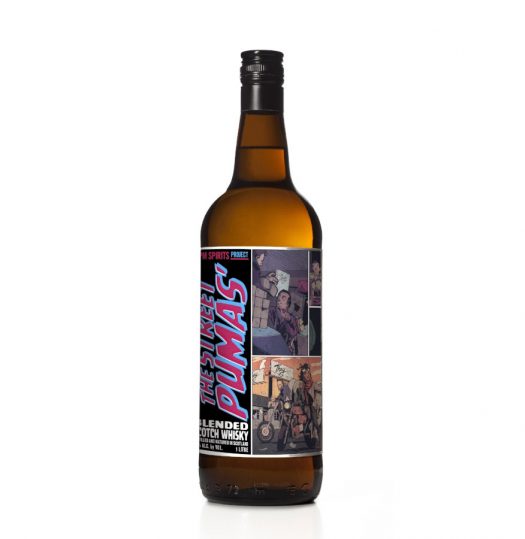 Back in March, we introduced you to three spirits from The Street Pumas line with a promise of a blended Scotch whisky that was still on its way over from Scotland at the time. Well, it finally made it stateside, complete with the same unique comic strip label as the rum, vodka, and gin. The exact source of this blend is not disclosed, but other details are as follows:

Distilled in Scotland, with a mashbill of 60% grain and 40% malt, this Blended Scotch Whisky is aged for 3 years. After resting in barrel, it’s imported to Jerez at cask strength and brought to proof for bottling. This selection is released with no additives; no caramel, no artificial flavors, sugars, or colors.

The first thing you notice about this whisky is its surprising clarity, without the traditional caramel coloring. It has just a slight golden tinge from its three short years of barrel aging. On the nose, this blend is light and buttery with toasted cereal and subtle melon notes. The youth shows, with traces of raw grain and camphor, but the creaminess of the malt in the aroma does a good job of masking it for the most part.

On the palate, youth is again apparent in the lightness of flavor. There’s a honeyed sweetness, some grassy notes, and a hint of licorice. The oily body delivers those flavors well, albeit for only a brief amount of time. The finish is pretty abrupt on this one. While it’s young (the bare minimum age, in fact), there’s a healthy amount of malt in the blend, which ends up going a long way on the palate. PM Spirits, owners of the brand, describes the entire Steet Pumas’ line as “cutting edge well spirits.” As a well Scotch, this is a pretty good option, but it may not fare well with a mixer.