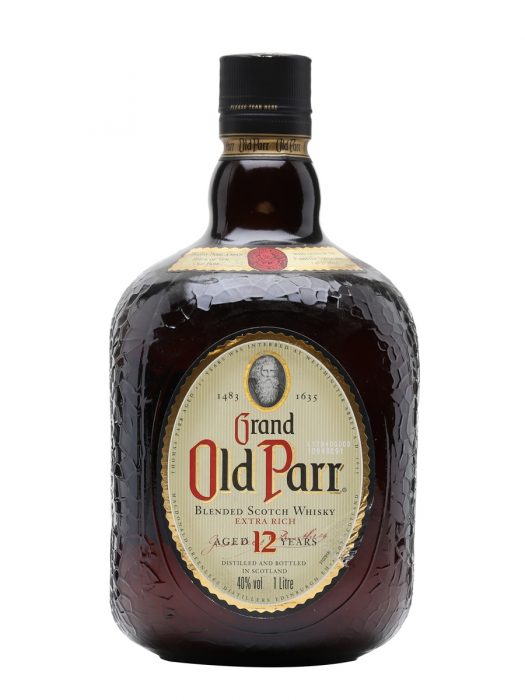 At Drinkhacker, we strive to bring you reviews of the latest and the greatest in the spirits world, as well as the tried and true classics, but sometimes there’s a bottle out there that gets lost on our shelves. Old Parr Blended Scotch Whisky 12 Years Old has been one of those bottles. Old Parr (or Grand Old Parr to be exact, per the label) was, according to the brand’s owner Diageo, inspired by the legend of Old Thomas Parr, who reportedly lived for 152 years and 9 months.

The brand first appeared in 1909, and its current brown, square, and dimpled packaging is a holdover from some of the earliest bottlings. While there are 15 and 18 year old releases of Old Parr, as well as a no-age-statement offering, the core of the lineup is the well-traveled 12 year old. You can find it in the states, as well as Latin America (it’s wildly popular in Colombia), but curiously it hasn’t been available in the UK or Europe since the 1980s. But we’ve probably wasted enough time not sharing our thoughts on this one with you, so let’s dive in!

The nose on Old Parr 12 is immediately honey sweet with a rich maltiness and notes of shortbread cookie, lemon, golden raisin, and linseed oil. Hanging over all of that is the slightest hint of smoke. It’s more complex than I would have expected, bordering on a single malt in its depth. On the palate, things are a little more restrained. The body is light with chewy cereals and baking spice (heavy on the cinnamon and nutmeg) and layered with subtle notes of dried oranges and darker fruits, evidence perhaps of some sherry aging in the blend. It comes dangerously close to a saccharine level of sweetness but gets saved in the end by a salty touch of brine and smoke. It’s easy to see why this is a blend with broad appeal.