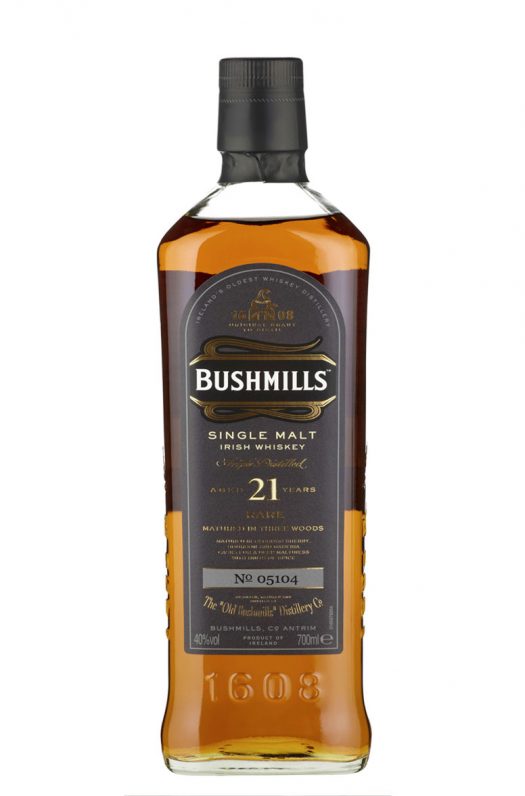 If you haven’t already noticed, whiskey prices are going up across the board, particularly for older single malts. The record for a single bottle price at auction exceeded six figures just last year (a Yamazaki from Japan, no less), and there’s still no sign we’ve hit the ceiling. Even readily available older single malts, like the Macallan 18, have started creeping steadily north, and if you’re seeking to splurge on a bottle that’s old enough to drink itself (that’s 21 years, for those who’ve forgotten), you will typically have to fork over multiple hundreds of dollars. Thankfully, there are a few exceptions to this trend, one of which happens to be a single malt made by the oldest distillery in the world.

The venerable Bushmills Distillery received its grant to distill in 1608, so you’d assume they know a thing or two about old whiskey. Their 21-year-old offering, the oldest in their standard line-up, is aged for a minimum of 19 years in Oloroso Sherry and ex-Bourbon casks before being vatted and then finished for a further two years in Madeira wine casks. A fortified wine hailing from a small Portuguese archipelago in the north Atlantic Ocean, Madeira is aged deliberately in a hot island climate to achieve unique dark fruit and caramel notes. While not as common as bourbon or sherry casks for finishing, Madeira is growing in popularity with whiskey-makers, and it’s easy to see why with the Bushmills 21 year.

The pale gold color of most Irish whiskeys tends to immediately set my expectations for a lighter, often less flavorful spirit, so it’s refreshing to see a healthy dose of darker color, closer to amber, in the Bushmills 21 year. The nose also evidences a rich, deeply flavored spirit with notes of stewed dark berries, buttered toffee, and vanilla bean. The palate holds true to these promises with a sizable body for something triple distilled. All that barrel finishing has added honeyed layers of clove and cinnamon, sweet prune, dark fruit jam, and caramel. The finish is exceptionally long with lingering notes of oak and raisin. This is delicious stuff at any price point, but in a world of six figure whiskies the comparatively meager price of admission on Bushmills 21 makes it even harder to beat.