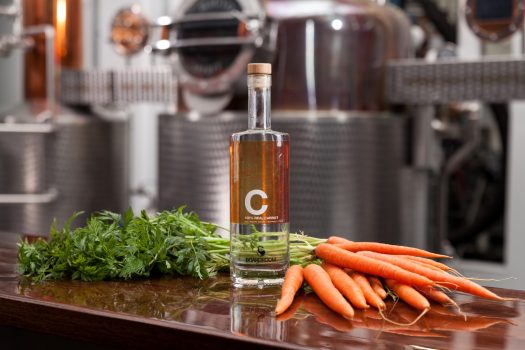 Ready for something completely different?

Boardroom Spirits, which makes a straight vodka and gin that we’ve reviewed previously, is out with a new white spirit made from 100%, well, carrots. The carrots (12.5 pounds per half-bottle) are cleaned, fermented, and distilled. Nothing is added to the finished distillate, effectively making this a kind of eau de vie (unaged brandy) — but made from a vegetable instead of a fruit.

This is actually the second release in the company’s “Periodic Table of Spirits” collection. B — distilled from beets — was a release we missed.

Let’s give carrot brandy a try!

Well, the good news is that it doesn’t smell or taste like carrots, not in any identifiable way, anyway. The nose is actually quite grain-heavy, similar to a corn-based white whiskey, funky with mushroomy earth, burlap, and some camphor. Water helps (a lot) to bring out sweetness on the palate, showing off some agave-like notes alongside a vaguely vegetal character that is the closest that C gets to tasting like carrots. Really, think parsnips, raw alcohol, and hints of petrol, leading to a finish that’s cleaner and, in its own way, more refreshing than you might expect.

That said, it mainly plays for novelty value.

Update March 2018: Boardroom, concerned we had originally received a bad bottle, sent a new batch of C for us to re-review. Again, the nose is heavy with white whiskey notes and hints of burlap sack, though I didn’t detect any camphor character. On the palate, I got a moderately sweet but quite spicy kick — almost fiery at times, an experience I never had in my first go-round with C. I wouldn’t call it carrots, but something more akin to red bell pepper, dusted with cloves and some gunpowder notes. The finish is a little smoky, with some petrol to it, though on the whole, a pretty clean experience. Updated rating: B