How Patrón Turns Technology into Tequila 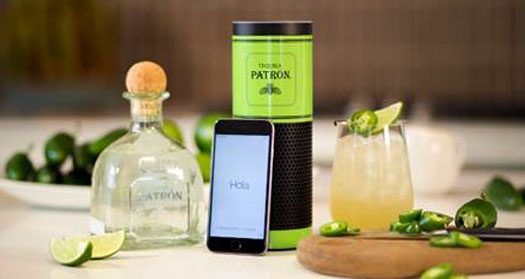 High-tech has finally made its way to the agave fields of Jalisco, where Patrón is working to leverage tech to bring drinkers around the world closer to the brand.

The first technology involves VR, in which Patrón showcases the company,and production facilities in virtual reality. Using a Samsung Gear VR Virtual Reality Headset with a Samsung Note 4, we were able to visually walk the paths through their agave fields, watch an enormous wheel made from volcanic rock crush the roasted piñas, and look down rows of the aging barrels stacked high. The VR technology lets you look  left and right…even turn back and look where you’ve been or up at the sunny sky above. The music adds to the experience, and we liked the little honey bee who guided us in. It was fun and, of course, we had to watch it several times to take it all in. Kudos to Patron for producing a marketing video that’s actually fun to watch.

Up next is the Patrón Cocktail Lab, which uses Amazon Alexa (Amazon’s virtual assistant web app which interacts and responds to voice commands) and powers the Amazon Echo. Patron uses Alexa to help you narrow down the thousands of cocktail possibilities into something that fits that evening’s mood. By answering a few basic questions about what you like, Alexa recommends, and provides recipes for, drinks tailored just for you. You can save them for future reference if you like. It’s a fun way to interact with your guests at a party by letting them tell Alexa their likes and selecting the perfect cocktail, though you may have to try it more than once if you’re missing ingredients. If you don’t have any devices with Alexa, you can still access the Patrón Cocktail Lab from their website.

Kim Richards lives in Santa Rosa, California. She is an author, amateur cheese maker, wine/mead maker, and a novice home brewer. She enjoys a nice cocktail while listening to live music, watching movies and mixed martial arts, or dining at home and in restaurants. She and her husband frequent festivals and love to visit breweries and distilleries. Favorite cocktail: Old Fashioned with maple syrup.