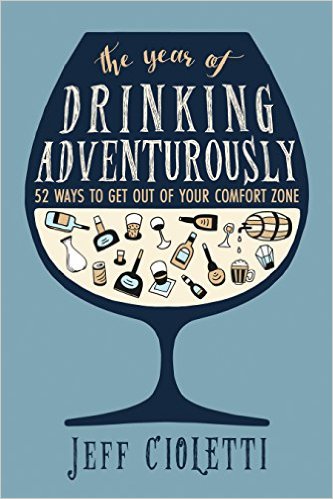 Writer Jeff Cioletti wants you to put down the Budweiser and the shot of JD. “Drinking adventurously” means exploring the vast array of beverages the world has to offer, and Cioletti guides you through 52 of them in a guidebook that is meant to be consumed one chapter (and type of drink) each week.

Cioletti starts us off with Scotch, exploring the islands in addition to safer Speyside. From there it’s on to bourbon and rye, then quickly into such exotic categoris as baijiu, soju, pulque, and blueberry wine. It’s an adventure indeed: Some of these categories (namely the blueberry wine) I’ve never even encountered myself.

As a primer on the entire world of drinking, some areas (gueuze) are naturally far more adventurous than others (Canadian whisky), but Cioletti ultimately shows himself more interested in taking you on a global trek of alcoholic drink exploration, not just forcing Korean snake wine down your throat. There’s even a chapter on vodka included.

And that’s not a slight. Not every book needs to be a nerd-level deep dive into the rabbit hole of wine, beer, and spirits. So long as you understand going in that you’re not going to learn everything there is to know about Scotch in nine pages of text, this book is definitely worthwhile and often lots of fun, to boot.

The Year of Drinking Adventurously