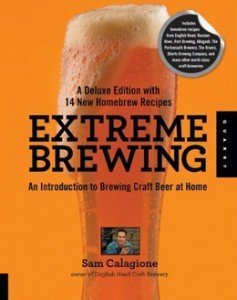 We presented Alt Whiskeys previously. Now we have Extreme Brewing. Written by Sam Calagione, owner of the highly-esteemed Dogfish Head Brewery, Extreme Brewing is a treatise on how to make beers that push the boundaries of the beverage. Several dozen recipes are included, ranging from the expected pilsners and lagers to stuff that includes pumpkin, cranberries, and Port-soaked oak chips. A number of recipes for commercially-available brews, like Dogfish Head’s prized 60 Minute IPA and Allagash’s Belgian Wit, are in the mix, too.

The front of the book guides you through the brewing process, step by step and complete with color photographs. Though it’s clearly designed for those who’ve been around the homebrewing block a few times, I get the feeling that even a rank novice could handle making some of these his first time out.

This new edition, published in 2012, includes 14 extra recipes and spans 224 pages. It’s altogether a solid and worthwhile addition to the homebrewer’s bookshelf. 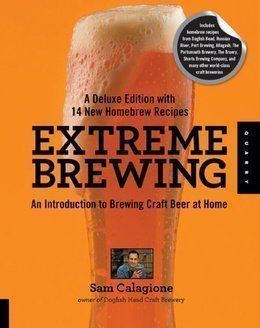