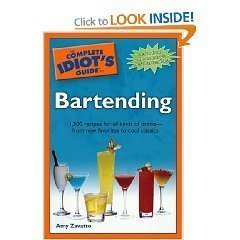 While I was pleasantly surprised to find that the recent Complete Idiot’s Guide to Wine Basics was a credible and well-written introductory guide to the world of wine, another book from the Idiot’s series unfortunately bears little similarity.

The Complete Idiot’s Guide to Bartending, by Amy Zavatto, boasts 1,500 recipes on its cover, but sheer volume is the only thing it has going for it. The problems begin with the excruciating first four chapters (wedged into 48 pages), wherein Zavatto tries to explain how to stir a drink with ice, that you shouldn’t drink and drive, and — most painfully — explains via table that some booze is more expensive than other booze, but fails to offer an opinion on whether it’s worth it to upgrade. To see the entire wine world crammed into a third of a page (and a mere quarter page for beer) is so laughable one wonders why it wasn’t excised by a shrewd editor.

But eventually we move on to the bulk of the tome, and that is recipes. They are helpfully split up by main liquor type, but that’s about all I can agreeably say about them. Surely no one has ever ordered a bouzo — bourbon and ouzo on ice — but obscurities like this are no reason to hate the book. Rather, it’s that some of the recipes are just plain wrong. The absolute worst offender: The caipirinha recipe, which calls for the juice of an entire lime, twice as much (or more) than you’d need and likely to kill both the drink and the drinker.

Other issues are less heinous but still eyebrow-raising. The type of vermouth in most recipes is often unspecified. The martini’s vermouth is, but the recipe calls for three whopping, brutish ounces of gin and a “dash of dry vermouth.” And the recipe for sangrita included is a more obscure, alternate version, which includes no tomato juice.

The Complete Idiot's Guide to Bartending 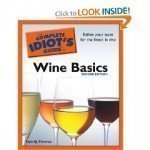