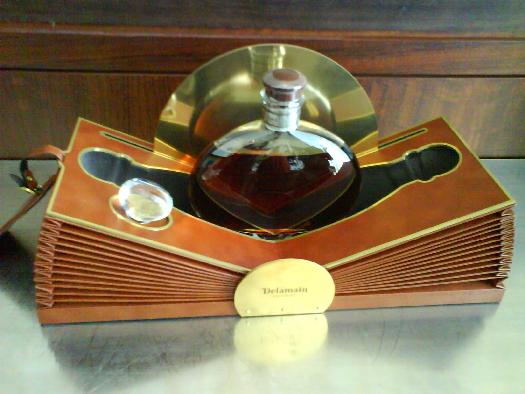 All hail the House of Delamain.

I reviewed much of Delamain’s exceptional cognac line earlier in the summer. This week, the company’s Managing Director Charles Braastad took the time to guide me and a handful of other wine and spirits writers through his company’s offerings. This tiny cognac producer makes some amazing products: The youngest of its products are about 20 to 25 years old. Your typical XO cognac need only be six years old, and the vast majority of cognacs – VS and VSOP — are aged less than that. Delamain ignores at least 90 percent of the market and aims exclusively at the top tier.

We tasted six of Delamain’s products, including the four I wrote about earlier.

My notes and ratings were very similar as they we were back then, although this time we were tasting over lunch (and one wouldn’t normally drink cognac with a vinegar-laced salad dressing), and the presence of some 50 glasses of cognac around the room certainly led to some heady aromas in the air… all of which really made you want to drink cognac, immediately and often. 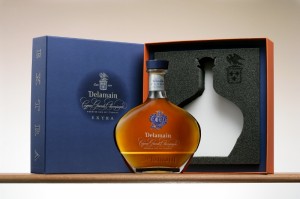 I rated the Pale & Dry XO an A- this time out, really enjoying its oily honey- and vanilla-laced flavors as an aperitif. Ditto the A- for the much different and far richer Vesper, which has more wood and smoke and is more of a bruiser than the XO. Again I felt the Tres Venerable (B+ this time) was potentially too long in the cask, with a pronounced bite and an intense woodiness that was almost overpowering in its earthiness. And, yes, once again Extra de Grande Champagne (pictured) was my runaway favorite (again an A), a candy-coated cognac full of gingerbread flavor, apples, cinnamon, and other complex spices. Extra reminds me of Christmas — like a movie Christmas, not the crappy one you really had as a kid.

Two cognacs I’d not yet tried were also on tap. The first is Delamain’s Reserve de la Famille, which had previously been held only for family members and visiting guests. Unlike the others in the line, it is not a blend, but a single-barrel cognac that has been aged (roughly 60 years) to the point where the alcohol has naturally dropped to 86 proof. (Diluted cognac is slowly added to all the other blends to bring them down to 80 proof.) As with many single-barrel spirits, the subtlety and smoothness is absent here, and the spirit is less balanced than Delamain’s blends. But it was surprisingly mellow considering its origins, though the higher alcohol level gave it a bit too much heat. At $599 it’s a bit hard to justify over the $399 Extra, but I liked it well enough to rate it a B+. [BUY IT NOW FROM CASKERS]

Last and certainly not least is Le Voyage, which is, hands down, the most expensive spirit I’ve ever sampled. One bottle (and only 500 were made) costs $7,000, which includes the Baccarat decanter and leather carrying case (see photo below). Braastad noted that most of the bottles sold to date (about 250) had been sent to Moscow and Dubai. How does it taste? Le Voyage is meant to inspire you to think of a voyage, “a series of global subtle sensations” that include Russian leather, tropical musk, American tobacco, African coffee, Far Eastern spices, and of course the Grande Champagne fruit. It is a complex blend (bottled at 84 proof) and, while I didn’t pick out any Russian leather, the notes of tobacco and smoke are palpable. There’s a little heat here again, and the spirit really packs a punch, but I’d certainly give a lot to sample the stuff one more time. Alas, three modest sips had drained it away. Sigh. For $7,000, you’d have to have mad oil money to afford it, of course. Putting the price aside (which you have to to even consider something at this level), I rate it a solid A-.

Thanks again to Delamain and Charles for an insightful, educational two hours.

Tasting the Liqueurs and C2 Cognac/Liqueur Blends of Merlet (2013)
Posted in Brandy, Buy It Now, Cognac, Rated A, Rated A-, Rated B+, Reviews, Top Rated