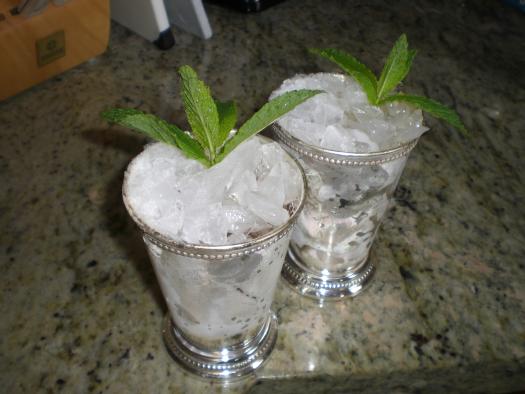 Today is Derby day, and while I’m leaning towards bets on Big Brown, Pyro, and Court Vision in Kentucky’s Run for the Roses, I’m more preoccupied with preparations for Mint Juleps, which are one of the few hard liquor beverages (aside from breakfast junk like Bloody Marys and Mimosas) that are acceptable to drink before cocktail hour, though only on one day a year. That’s even more impressive because a Mint Julep is pretty much all bourbon, and lots of it. There’s a good chance you’ll be trashed after just one.

So, how to make one? The Mint Julep is filled with lots of decisions, most of which are a matter of personal taste. Granulated sugar or simple syrup? Muddled mint or just a mint rub? What kind of bourbon to use? Straw or no? Even the kind of cup you use is up for debate.

The original Julep is a pretty easy affair: Dump a little sugar and water in a glass, muddle with mint, fill with ice, pour in the bourbon, and drink. Modern science has provided new options: The Wall Street Journal’s Eric Felten recommends making a mint-steeped simple syrup (or using Sonoma Syrup Company’s bottled mint syrup), and drinking the thing with a straw. (As much as I love Felten, he also recommends a $300 ice shaving machine and solid silver tankards (mine are silver plate), too.)

The choice of bourbon is another sore subject with many. However, I find almost any bourbon works well in a Julep because the mint and sugar overpower any subtlety in the spirit. It’s one of the few times I actually use Jack Daniel’s. (And don’t tell me a Tennessee whiskey is heresy: The Mint Julep originated in Virginia, not Kentucky.) So feel free to grab the Jack, Jim Beam, or whatever’s on hand. Today I’m using Knob Creek, one of my favorite bourbons in any cocktail.

I like to add a float to my Julep, something that’s a bit out of style in most recipes, probably because the 3-plus ounces of bourbon you’re getting here is enough booze for anyone. But a dark rum float adds some flavor that take the Julep from “minty sweet bourbon” into a more interesting direction, especially on that first sip — which, for the record, I highly recommend consuming without a straw. Sticking your face into the mint and breathing that heady aroma in deep is what the Mint Julep is all about.

So, at long last, here’s the full recipe!

Drop a handful of loosely torn mint leaves into a silver tankard or rocks glass with 1 oz. simple syrup. Muddle lightly (heavy muddling can bring out bitterness), then fill about 3/4 of the way with crushed ice (crush it the best you can but don’t worry if it’s still pretty rough and rocky). Fill with bourbon to about the level of the ice and stir to mix the Bourbon with the syrup and mint. Top up with crushed ice to overflowing, then splash a very small amount of dark rum on top as a float. Garnish with a nice sprig of mint and serve immediately.

All measurements are approximate. The Mint Julep, in my mind, is one of the best cocktails for just grabbing a bottle and making up proportions as you go, to suit your taste. Now get out there and make some bets! 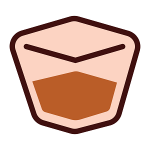 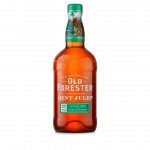