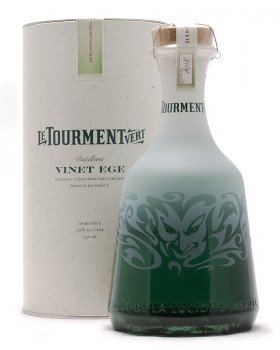 From French brandy distillery Vinet-Ege comes a new entry into the “with wormwood/thujone” absinthe market, Le Tourment Vert. “The Torment,” when it arrives on our shores (any day now) will be the fourth such absinthe to hit the market here. It joins Lucid, Kubler, and St. George, all of which are slowly, tentatively finding their ways on to U.S. liquor store shelves. (Fair warning with this review: I am not an Absinthe expert.)

Absinthe containing wormwood has been illegal here since 1912, after a notorious legal case led to it being banned in several European countries. Absinthe, it was said, was powerful enough to cause a man to see demons, murder his family, and the like. This was blamed on thujone, a hallucinogenic compound in the wormwood.

Absinthe laws have been being overturned in Europe in recent years thanks to strenuous lobbying and a little technology: Thujone is illegal, but wormwood is not. These new absinthes contain wormwood extracts but reportedly no thujone. That’s the case with Lucid and Kubler, at least. I’m not so sure about Le Tourment Vert. Regardless, I’m not here to analyze the chemical makeup of the product, just to tell you how it tastes.

Unlike most absinthes, Le Tourment Vert is a bright green liquid (some say it is artificially colored), bottled at 100 proof (less than Lucid and Kubler), and characteristic in flavor of many of the new absinthes. But side by side, I preferred Le Tourment. Many modern absinthes have a pronounced bitterness, which is why you really must drink them in the traditional fashion: With water and sugar. But honestly, Le Tourment can actually be drunk neat if you like, though I find it improved by drinking in the traditional fashion, with water and sugar.

Unlike many absinthes, Le Tourment is quite sweet, so much so that it cuts the licorice aroma when you first take a sip. The licorice returns on the finish, dissolving into herbal notes (which must be the Saveurs d’Herbes mentioned on the label). Hallucinations? Well, no, but I have had to cap myself at one glass per day…

The color is unreal, and to be sure it’s artificial. That’s a strike, sure, but dig around and you’ll find that a lot of absinthes out today resort to the same trick, though perhaps not as boldly as Le Tourment.

If you’re into absinthe, at least a little, track down and snatch up a bottle of the stuff. It’s significantly different than anything else on the market; and while it’s very controversial, it’s an interesting counterpoint to the more traditional absinthe bottlings out there.

Speaking of the bottle, it’s a real work of art: etched glass with the face of a demon, women’s faces in profile, and that inimitable green fairy hidden amongst the swirls. When full of the green stuff, the effect is quite striking (though my photograph doesn’t do it justice).

This review has been updated with new information made available since the original was written in 2007.

Re-tasting update: Wow, was I ever wrong on this one…

This Can Only End Badly…

Does Absinthe Make You Hallucinate?