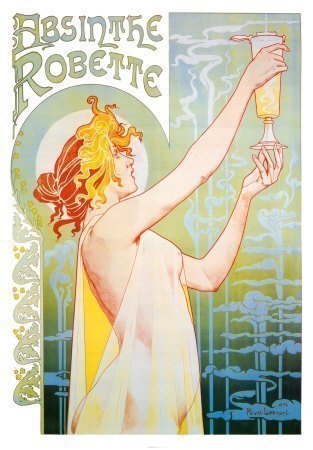 Absinthe is the subject that keeps on keeping on — some of the forum battles over the intricacies of the subject here are legendary — and in honor of Vieux Carré‘s fine showing, I thought it would be personally instructive to revisit some of my most highly rated absinthes — and a few I didn’t like so much at first — in a side-by-side-by-side scenario.

This is an informal review, just a re-sampling of several of the more noteworthy bottles from prior reviews. But I thought it would be fun to see whether my opinions have changed since the early days of the blog, when some of these absinthes were initially reviewed. They appear below in my order of preference (with gut reaction ratings), based solely on this limited sampling.

To clarify: This is not a comprehensive sampling of EVERY absinthe on the market or even every absinthe I have on hand, just a ranking of seven I thought merited a re-taste. Some very good products are not included here.

On to the absinthe, starting with the best.

Obsello – 100 proof, gorgeous milky louche. Relatively subtle flavor; goes down incredibly easy. Interesting additional herbal notes but nothing overwhelming. The comparatively lower alcohol content is noticeable when compared directly to others in the group. Shockingly, also the cheapest real absinthe on the market. A

La Clandestine – 106 proof, clear/louches to a milky white. Sweetest absinthe of the bunch, and very mild. Anise is practically an afterthought, here. Extremely easygoing. A

Pernod – 136 proof, big and muddy green louche. Artificially colored. Huge, bittersweet flavor. Almost like licorice candy. Pleasant but different than lighter style spirits, and by a wide margin the strongest flavor in the group. A-

Koruna – 146 proof, pale color with no louche. Tart character, with clearly citrus overtones. Lighter in style and dominated by alcohol rather than anise/wormwood. I’m still a fan. A-

Kübler – 106 proof, clear/louches to milky white with yellow notes. Heavy lemon notes are love-it-or-leave-it, I think they clash with the anise here — which may be why this didn’t strike me as especially good on first review. I’d dismissed it as a bit boring originally, but it’s indeed unique when you put it side by side with the others. Still, though, not a favorite. B

Lucid – 124 proof, pale color with light yellow louche. Quite bitter and a little off-putting on first taste. It grows on you over time, but there’s better stuff out there. B- [BUY IT NOW FROM CASKERS]

Le Tourment Vert – 100 proof, blue-green with (contrary to popular opinion) a slight louche. Artificially colored. Amazing how wrong I was, and I humbly have to give credit to the commenters on this one who told me I was nuts. (I plead youth: It was the first absinthe I formally reviewed, back in the day.) Really strong chemical flavor and psychedelic coloration combine in negative ways for me now. It’s got a huge mint character, which is probably why, in combo with the coloration, people make comparisons to mouthwash. I’d give this a much lower rating today, though it has some charms. C

Interesting that the lighter-flavored absinthes tended to do better in my ranking, with the exception of Pernod, whose strongness surprised me just as much as the backlash against it has. And in case you’re looking for more “top” absinthes out there, in addition to the top 3 on this roundup, add Vieux Carré, Nouvelle Orleans, and St. George to the list of “absinthe bests.”