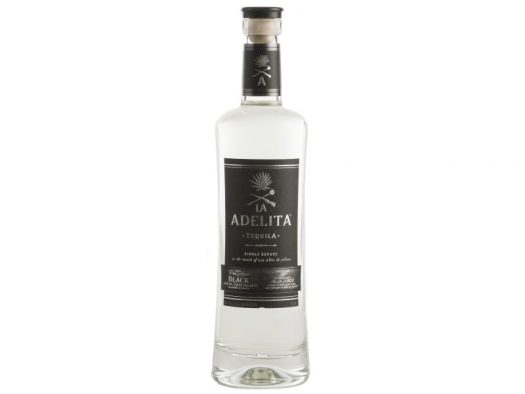 Several tequila distillers are lobbying to have cristaliño added to the four existing official tequila categories. A cristalino is an añejo or extra añejo tequila that after aging has been filtered to have color but not flavor removed, producing a spirit that is clear, but with all the flavor that the tequila has picked up while aging in the barrel. Whether that makes it a new category is still up for debate, though it’s definitely increasing in popularity.

We’ve already reviewed La Adelita’s Blanco and Reposado tequilas, and now La Adelita presents its cristalino, which it confusingly labels as “black.” The spirit has been aged for 18 months in second-use American Oak whiskey barrels which are re-toasted in Mexico to put some flavor back into them. The tequila is then filtered (using a proprietary technique, of course) to produce the cristalino.

In color, the cristalino does surprisingly seem even more silvery than a true silver or blanco tequila. The nose is a knockout. It seems to have all the elements you could possibly want. Most prominent is an unusual saltiness, then comes some earthy agave, and a mix of rich honey and perky candy sweetness, with both vanilla and oak from the re-toasted barrel. Some lemon citrus and pepper spice turn up towards the end of the party.

The palate follows through on what the nose promises, though the candy notes disappear and the vanilla creaminess steps forward. There’s both saltiness and lime, as if this was made with margaritas in mind, subtle hints of pepper, and the finish provides some more of that agave earthiness, reminding us where the whole process started. A very satisfying tequila, whatever category it’s in.