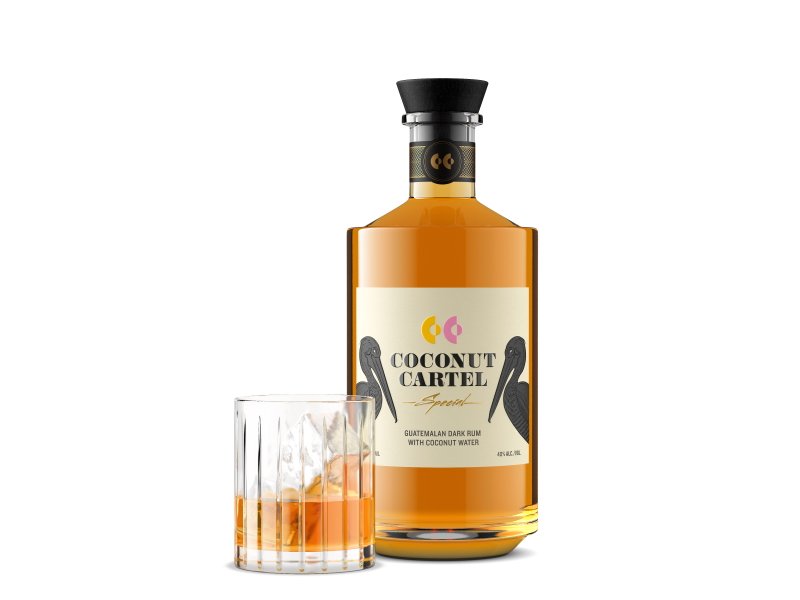 The name of this rum brand comes from the fact that founders — brother and sister Dani and Mike Zighelboim — used to smuggle suitcases full of coconuts to hotels in Miami from their home in El Salvador. Eventually they were supplying coconuts to customers as far north as The Hamptons. Finally they went legit and decided to go into the rum business too.

The rum is from a distillery in Guatemala, where it’s a blend of rums aged from 4 to 12 years, aged in charred American oak casks to produce what’s described as an añejo rum (though rum doesn’t have an official añejo category in the way that tequila does). The unusual part of the process is that the rum is cut from cask strength to 80 proof for bottling not by the normal means of adding water but by adding coconut water from El Salvador.

Coconut Cartel is described as a dark rum but to our eyes it’s more of a gold rum, more amber in color rather than brown. It also qualifies as a flavored rum, of course. The nose is unusual in that at first the aromas follow typical rum scents of vanilla and caramel, with the coconut light in the background. Swirl the glass a few times, though, and the coconut leaps into the spotlight.

The palate is where the coconut is more evident, with notes of banana, vanilla, caramel, and a certain flinty minerality and touch of saltiness from the coconut water. It lingers on the finish with a sweet coconut taste. This can certainly be enjoyed for sipping, or on the rocks. It lacks any real depth, though, and as the finish emerges, one finds it to be a perfectly pleasant but largely unexceptional rum.