Book Review: A Sense of Place: A Journey Around Scotland’s Whisky 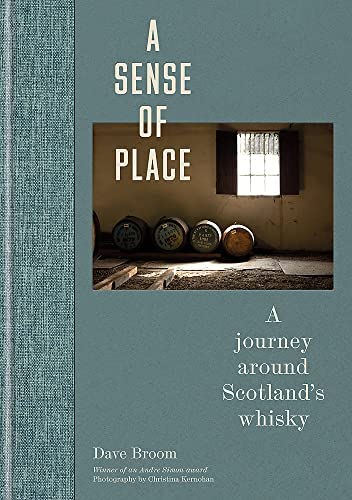 On one of my first press jaunts as a doe-eyed, aspiring whisky scribe, I sat on a bus next to Chuck Cowdery, someone whom I regard and respect as a true statesman of the profession to this day. We were discussing Kentucky (I was fairly new to the Commonwealth at the time), and he leaned in to deliver some sound wisdom: just as important as the bourbon itself are the people who make it. There are some real characters and fascinating history to be unearthed. Taking time to listen to their history is every bit as important as the end result inside the bottle.

I thought of this conversation while reading Dave Broom’s latest, A Sense of Place: A Journey Around Scotland’s Whisky, which recounts the author’s latest adventures traveling thousands of kilometers around Orkney, Harris, Islay, Raasay, and all parts in between. It’s a 250+ page tour de force listening to people’s stories, from barrel and grain to copper and oak, to eventually the final packaging.

Readers of his 2017 award-winning book, The Way of Whiskey: A Journey Around Japanese Whisky, will recognize a familiar sensitivity that Broom treats his subject. For that project, he traversed the Japanese countryside journeying from distillery to distillery developing intimate character sketches of the people who made the magic of whisky happen. He also painstakingly detailed the process and ingredients by which the magic occurs, without lamenting too heavily on the increasing popularity of the spirits or their place in pop culture.

Even though Broom is a native Scot, his enthusiasm for the people and region makes his wanderlust feel organic and fresh: he may have visited these places numerous times, but the detail with which he exacts his profiles reads as if he’s a newcomer straight off the plane.

Also a familiar theme: stellar photography. This time around, Broom’s collaborator is Christina Kernohan, whose name you may not recognize but whose work has been featured in numerous publications and advertising campaigns for some of the biggest names in the industry. It’s an ideal pairing, as Keronhan’s portraits of people and places not just compliment Broom’s words, but elevate them. There are some familiar tropes: someone inserting their nose into a glass while surrounded by casks, rural landscapes bordering on the poetic. But Keronhan’s keen eye delivers the book’s rich and vivid tone, a steal of a coffee table book at twice the asking retail price.

The distilleries at the core of “A Sense of Place” are not just the usual names that often appear in the articles and blogs of the local zeitgeist. He turns down every lonesome road on the map to create character sketches that are warm and compelling as if you’re in the rickhouse sampling a dram alongside or sitting next to a fireplace waiting for the kettle to boil. Quite likely the best whisky book that will be released this year.

A Sense of Place: A Journey Around Scotland’s Whisky