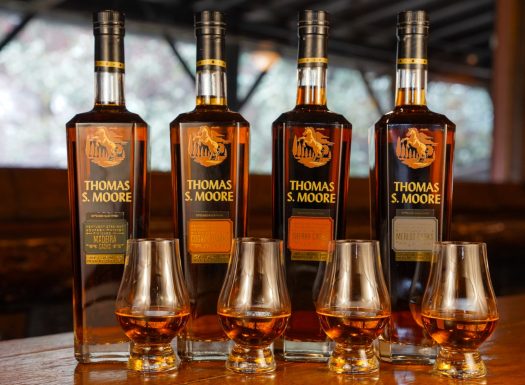 Three wine-finished whiskeys from Barton 1792‘s Thomas S. Moore brand felt like a lot at the time… but are you ready for moore of them? (Sorry.) Now Moore is out with four additional expressions, three finished in additional types of wine casks and one in Cognac barrels.

Here’s some errata, before we start sipping:

To create these whiskeys, Barton 1792’s signature high rye recipe bourbon was aged for five to six years in new charred oak barrels before filling other casks that previously matured various wines or spirits from around the world. These whiskeys are then left to age an additional one to four years. This extended cask-finishing method results in elegant whiskeys, each displaying a distinct flavor profile, reflecting nuances of both the bourbon and the finishing cask.

“This second Thomas S. Moore release really reinforces that the extended aging is quite significant,” Master Distiller Danny Kahn said. “What we are seeing are complex, fuller textures being developed. Savory flavors and aromas are unquestionably enhanced and continue to develop in the secondary cask in ways that are very different from the primary barrel aging. The result is an elevated, premium collection unlike any other.”

The cognac barrels Kahn used generally held cognac for six or more years previously. The merlot barrels came from premium wineries from the Napa and Sanoma areas. The sherry barrels were all oloroso sherry. A variety of different types of madeira barrels were used.

Kahn, who personally tasted every single barrel that went into this release at least once, created a few sub-blends for each expression. From there, the sub-blends were sorted based on categories of flavors from which the final blends were chosen. The four resulting expressions are a beautiful demonstration of the art of blending.

Thomas S. Moore Kentucky Straight Bourbon Whiskey Finished in Madeira Casks – Madeira-finished whiskey is often oppressive — this one is finished for 2 to 4 years — but this expression is comparably approachable. While smoldering and intense on the nose, the winey notes don’t come across as overwhelmingly oxidized or sharp. Instead it’s heavily floral, potpourri-like. The palate has a significant density, with notes of prune and pine making for a somewhat curious quality that feels part pastoral, part pungent. Strangely spicy on the finish. 96.5 proof. B

Thomas S. Moore Kentucky Straight Bourbon Whiskey Finished in Merlot Casks – Finished 2 to 4 years. Dark fruits lead the day on the nose here, immediately engaging the senses with notes of plum and cherry and a layer of woody oak. The palate seems to continue that thread, until it takes an unfortunate turn midway through. Things bog down and get gummy and aggressively winey, the heavy tannins feeling oppressive as the finish builds. This ultimately feels more oxidized than the Madeira expression, a victim of too much time in the finishing cask, likely. 93.3 proof. B-

Thomas S. Moore Kentucky Straight Bourbon Whiskey Finished in Sherry Casks – Finished 1 to 4 years in oloroso sherry. Classic sherry notes front to back here: oxidized orange peel on the front end, with hints of furniture polish and well-roasted chestnuts. Then a palate driven by much of the same — albeit nuttier than expected, with a figgy fruitiness and a rumbling, lingering sherry character. More spice and florals here, drowning out what feels like a solid, moderately oaky bourbon core underneath. Again this feels like it’s spent too long in the finishing barrel. 98.7 proof. B+

Thomas S. Moore Kentucky Straight Bourbon Whiskey Finished in Cognac Casks – Finished 2 to 4 years in VSOP-level Cognac casks. The most approachable and best-balanced whiskey in this lineup, this Cognac-finished offering is quite soft and lively, with a nose of citrus peel, perfume, vanilla, and oak all in a swirl. Dark chocolate complements a stronger perfume element on the palate, mixing nicely with all the flowers, plus baking spice, and stone fruit. Creamy vanilla on the finish. 93.4 proof. A-