Making whiskey is an industrial process, dirty and noisy and smelly. But you’d be hard pressed to find any of that on the modern Bourbon Trail. The entire Blue Grass State has become a veritable Disneyland of gleaming visitors’ centers and sparkling rickhouses, increasingly too clean to be mistaken for what they truly are: whiskey barns. The visitor experience has changed, as well. What was once, more or less, a bourbon scavenger hunt from tasting to tasting, has become more of a bar crawl, and a high end one at that. In recent years, distilleries big and small have added bars and restaurants to their campuses, vying to claim more of the bourbon tourists’ time. And their dollars. 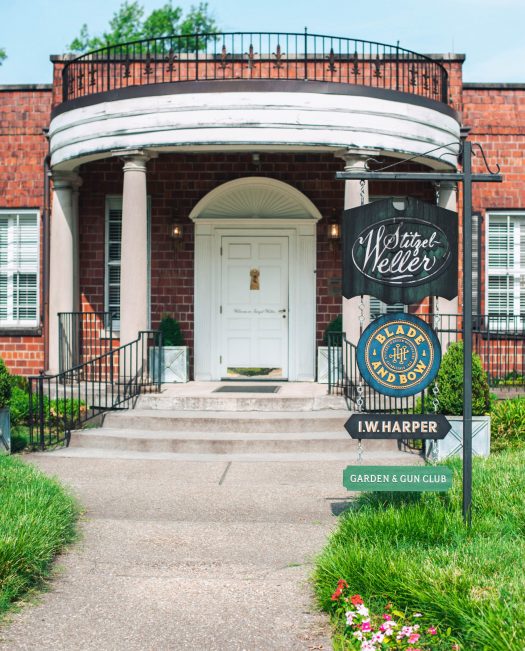 In 2021, the historic Stitzel-Weller distillery became home to one such watering hole, the Garden & Gun Club. It was only the second Garden & Gun Club in the country (the first is in Atlanta). It’s an appropriate pairing since the magazine’s focus is the “best of the South,” and the distillery, built by the infamous Julian “Pappy” Van Winkle Sr., lays historical claim to what many consider some of the best bourbons in the world. Never mind that the place is also steeped in the kind of bourbon history that any brand would covet. After closing, like so many, during the dark days of the bourbon bust, Stitzel-Weller eventually ended up in the hands of spirits giant Diageo who painstakingly revived the campus to its former glory in 2014. It became home first to Bulleit and now houses the Blade & Bow, I. W. Harper, and Orphan Barrel brands, which, after partnering with Garden & Gun, became the focus of the club’s impressive bar program. But I’m getting a bit ahead of myself.

First, the place itself. Through the Visitors’ Center and up the stairs, past a bit of tasteful taxidermy, you’ll find a space that’s a comfortable mix of modern industrial and vintage with warm, green walls, brass fixtures, and plenty of leather. It’s an aesthetic clearly designed for the modern bourbon drinker, but I imagine “Pappy” would have been happy to grab a drink here, too. The space isn’t expansive, but it’s big enough to easily accommodate a mix of local bar hoppers and bourbon tourists, fresh from their legally limited tastings and looking for just a bit more. 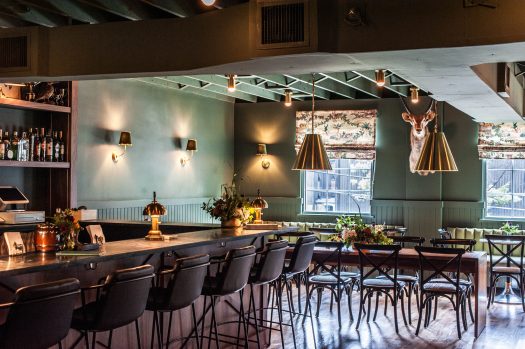 From behind the bar, lead bartender Greg Hojnacki walks me through the cocktail program, which hues toward recognizable classics that highlight the distillery’s flagship Blade & Bow bourbon. “Blade and Bow is kind of a spicy bourbon to begin with, well balanced with a nice body, so it stands out in a cocktail nicely with some cinnamon spice on the back,” he tells me as I dive into the menu. Among the classics on offer are a fan favorite Old Fashioned with a house made Demerara syrup and a refreshingly fruity Paper Plane. “A big seller recently,” Greg says, “perhaps because of the warm weather.” The bar makes its tinctures and syrups in-house and sources gorgeous, custom ice cubes, in a variety of shapes and sizes, from Kentucky Straight Ice. Everything is served in classic, custom glassware etched with various Garden & Gun motifs.

Even with a number of tried-and-true classics on the menu, there’s plenty of cocktailing creativity afoot here. Greg stresses that the team is always testing and developing new, unique recipes, albeit with a recognizable foundation. A Chocolate Boulevardier and French 75 variation are said to be in the works (if not already on offer since my visit last year). My favorite tipple is one of Greg’s favorites, his take on the New Fashioned with a bit of Johnnie Walker Black and St. Germain in the mix. It’s well-executed and refreshing with nuanced layers of smoke, baking spice, and herbal sweetness. 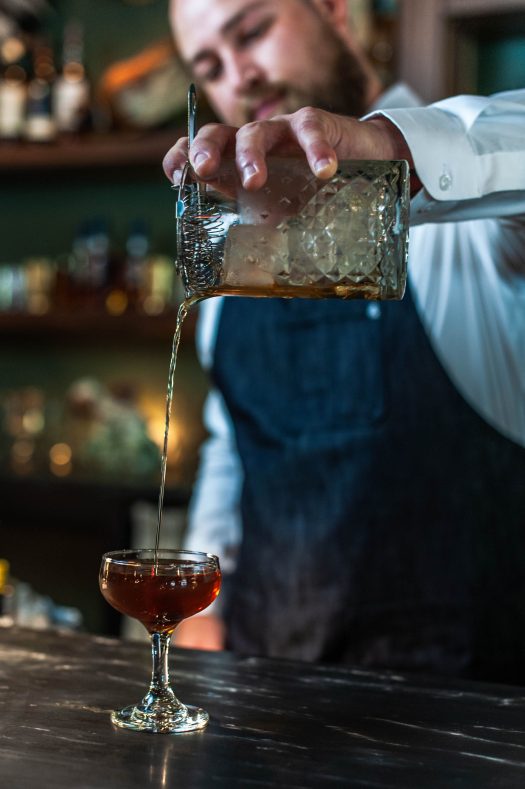 While the backbar isn’t overflowing with spirits options, you’re also not limited to whiskey cocktails exclusively. This is a Diageo outpost, after all, so impressive brands of all stripes and flavors are on hand. “If you want a Martini, you can get a Martini,” Greg tells me. “The joy of working within the Diageo umbrella is having access to so many great products.” But the whiskey-obsessed can rest assured, the bar offers everything you’d taste on a tour of the distillery and then some.

The tastings included in the Stitzel-Weller tour sometimes feature an Orphan Barrel product, but the Garden & Gun Club almost always has the latest bottles on hand. During my visit, the recent Copper Tongue and Muckety-Muck releases were available by the pour or in a flight. If rare Orphan Barrels aren’t luxe enough for you, the bar also offers The Blade & Bow Experience, a bespoke tasting of Stitzel-Weller’s oldest and rarest offering, Blade & Bow 22 Years Old. The distillery periodically puts a single bottle for sale in the gift shop after it is released in the fall, but if you aren’t lucky enough (or flush enough) to snag it, you can enjoy a beautifully presented single ounce pour in a unique, dimpled tasting glass handmade in North Carolina by Terrane, a Garden & Gun Made in the South winner. At $150 for the pleasure, it’s no easy splurge, but Greg swiftly closes the sale with me by stressing that I get to keep the beautiful tasting glass. 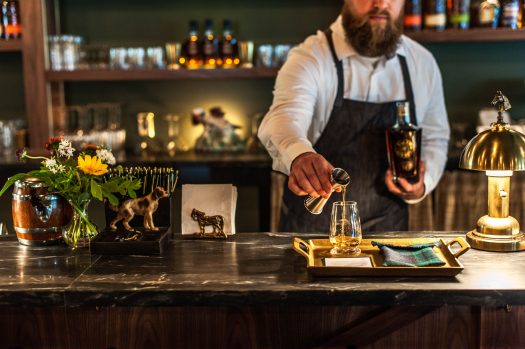 If a long day of bourbon tasting requires a bit more sustenance than bar nuts, the Garden & Gun Club has you covered with a small but creative menu that includes white cheddar jalapeno popcorn, Newsome’s country ham, and pimento cheese, which, as something of a pimento cheese connoisseur, I can assure you more than passes muster. Just ask for a few more of the sea salt crackers that accompany it. Bourbon and cocktail drinking are hard business, after all, and you’ll need to fortify yourself for the next distillery visit. And its new bar. 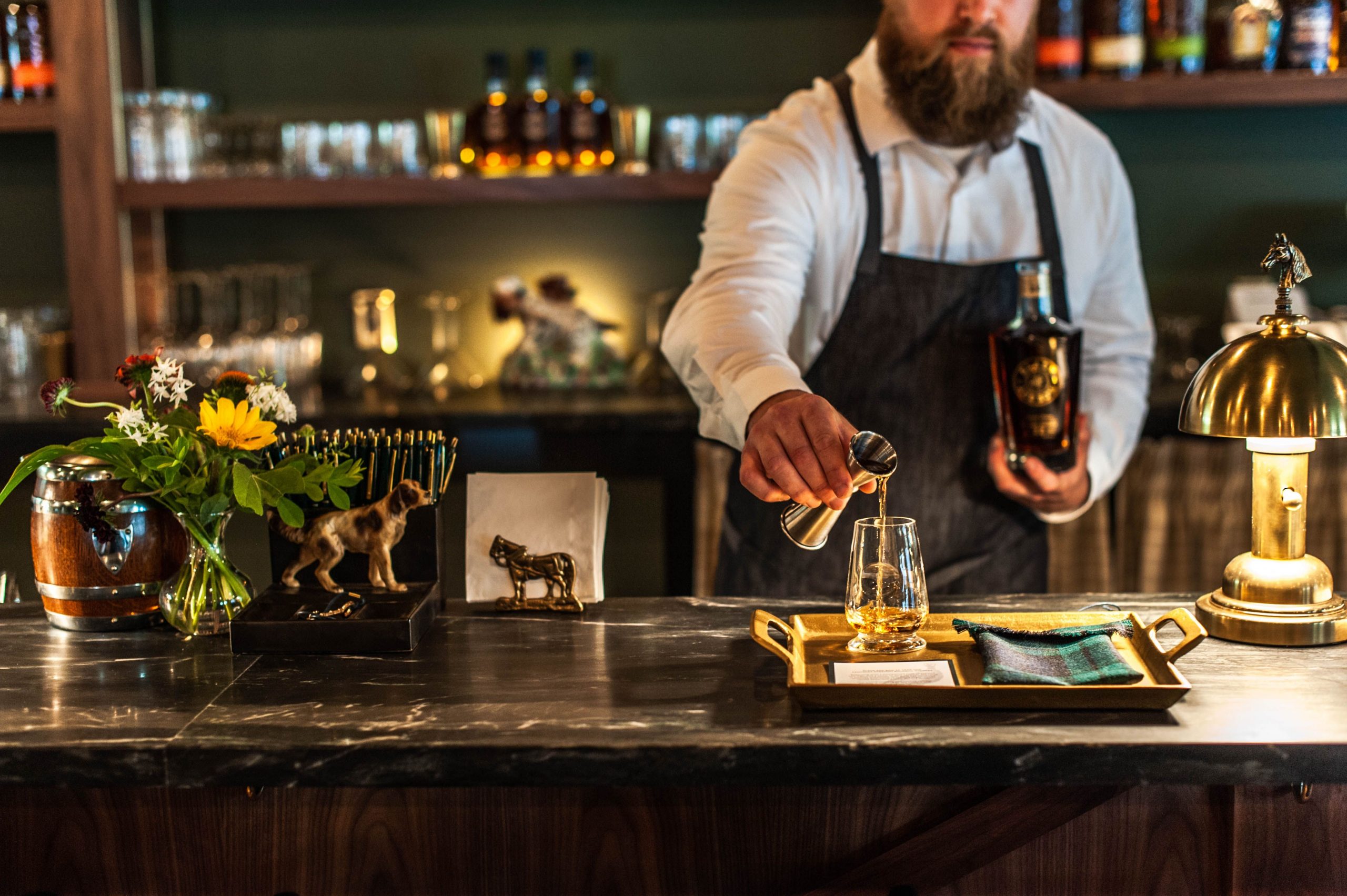