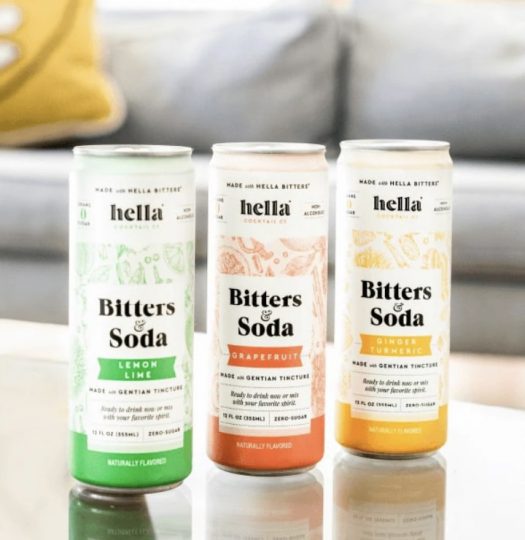 Hella Cocktail Co. is leaning into the spirits-alternative category with five bitters-centered non-alcoholic sparkling beverages. The Bitters & Soda expressions all feature “gentian tincture,” aka a tincture (medicine) made from the root of flowering plants in the Gentiana genus. Gentian root has been used for medicinal purposes for centuries across the continents.

Let’s dig right into five of their latest releases in this line. All are 0% abv.

Hella Cocktail Co. Bitters & Soda Dry Aromatic – It only makes sense to start with the unsweetened and least adulterated of the batch. The Dry Aromatic is simply comprised of soda plus Hella’s aromatic bitters, which is a pageantry of exotic herbs and spices such as Jamaican allspice, peppercorns, caraway, cinnamon, cloves, rose hips, angelica root, gentian root (oddly sitting at the bottom third of the ingredients list), anise, and chamomile. There does seem to be some natural added coloring, but not a hint of sweetener in sight. Given so many sharp-edged characteristics in the mix, they meld surprisingly nicely into a complex but well-balanced, woodsy, and spicy profile. It is most certainly dry on the palate. This is oddly satisfying despite the lack of any sweetness, making it a nice change of pace as a more brazen herb-infused seltzer, and it could certainly lend some kick and complexity to a mocktail that often lacks texture. I would actually drink this neat with a twist on occasion as well, when in the mood (or need) for a digestive tonic. B+

Hella Cocktail Co. Bitters & Soda Lemon Lime – Moving it up just a small notch on the flavor scale, the Lemon Lime appears to be essentially the Dry Aromatic with some additions in the Natural Flavor and Citric Acid categories (no mention of actual lemons or limes in the ingredients). And indeed, the profile mirrors the spiciness and dry mouthfeel of the Dry Aromatic, with a noticeable touch of softness and brightness from the “lemons and limes.” The biggest impression this leaves on me is how well I find this blend substitutes for a spirit, whether neat or in a cocktail. A-

Hella Cocktail Co. Bitters & Soda Grapefruit – The twist provided here are the “notes of grapefruit,” still unsweetened. The grapefruit is akin to the tartness of a white or yellow grapefruit, which adds a touch more character to the Lemon Lime citrus profile. This tastes uncannily like a less sweet version of a gin and tonic, and that on its own makes this a notable contender in the mocktail arena. A

Hella Cocktail Co. Bitters & Soda Ginger Turmeric – The ginger and turmeric add another dimension to the overall dry and bitter profile, with both more softness (from turmeric) and kick (from ginger). It’s a nice variation to the range of offerings, another one that would be satisfying neat, or perhaps add a splash of ginger ale for a spirit-free Moscow mule. A-

Hella Cocktail Co. Bitters & Soda Spritz Aromatic – Spritz is merely a version of the Dry Aromatic (or Lemon Lime, really) that has sugar added. The sugar is a bit jarring at first in comparison to the purist counterparts, but after the tongue has acclimated, the drink emerges as refreshing and bright with cinnamon at the forefront. It is a nice change from fruit-forward concoctions, with no diminishment of the herbal flair seen in the dry expressions, making this a very enjoyable and a rather mature spin on a mocktail. A-